His granddaughter, Barbara Effros is writing a book about this 1920s jazz trumpet great. She spoke to Phantom Dancer Greg Poppleton about her grandfather whose trumpet you’ve heard probably hundreds of times without knowing.

MYSTERY SOLVED
The interview started with a query,

“Barbara, on my LP copy of the cardboard ‘Hit of the Week’ record, ‘If I Could Be With You One Hour Tonight’, the liner notes query whether the trumpet solo is by Bob Effros or Red Nichols? Who is playing?”

“Hi Greg, yes indeed. This is my Grandpa Bob Effros with Dick Robertson on vocals. He recorded over 50 sides on HOW Discs including songs with Rudy Vallee , Eddie Cantor and others. Am building the HOW discography. Grandpa recorded over 200 recordings and composed 13 songs. ‘Tin Ear’, ‘Corn Fed’ and ‘Why Don’t You Get Lost’ are most popular from the 1920s. In 1942 he composed ‘Memr’y of this Dance’ with Ben Selvin. Also ‘A Million Reasons to Smile’ with Al Sherman recorded by Abe Lyman.” 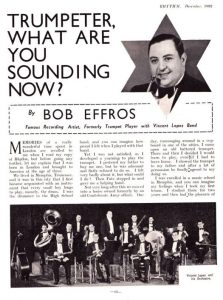 She writes that Bob was born in London in 1900 and moved with his parents to Memphis when very young. He ran away from home at 11 and worked on the riverboats where he heard jazz and picked up the cornet, listening to Joe ‘King’ Oliver. From 1917-19 he was a bugler in the US Army.

“After the war ended, he settled down in Baltimore playing in a band led by dancer and vocalist Bee Palmer. When Bob Effros arrived in New York, his only friend was from Memphis: W.C. Handy, ‘Father of The Blues.’ Mr. Handy sent to the young trumpeter to Sam Lanin for his first gig, and was hired at the Roseland Ballroom.”

Bob was an in demand trumpeter on the New York scene. He was in the Vincent Lopez Orchestra from 1921-27 and by 1929 was leading his own orchestra.

In the meantime he toured Europe frequently with Lopez with whom he remained a life-long friend.

Paul Whiteman chose him to fill in for the legendary trumpeter Bix Beiderbecke.

Bob wrote over a dozen hit songs including ‘Why The Twenties Roared,’ ‘Tin Ear’ (this week’s Phantom Dancer video), ‘Cornfed’, and ‘Why Don’t You Get Lost?’. ‘Sweet and Hot’ was his ode to Chinese soup. According to German wiki, in 1929, Bob started a family and got steady employment as a sudio musician for Vitaphone, recording music for the Betty Boop, Popeye and Feliz the Cat cartoons.

Bob remained active in the studios into the 1940s.

Barbara Effros is now writing a book about her jazz trumpeter grandfather.

Barbara wrote to me about where the book is at right now, “Still working on book – it’s a labor of love. I’ve become immersed in jazz history, personalities, Black/White cultural issues in USA/UK. I’ve yet to fully research Grandpa’s performances in Australia and South America. I have passports, ship manifestos galore. Perhaps you can direct me regrading Australian music magazines of the 1930s and 40s?”

https://www.facebook.com/BobEffros
Read more: www.BobEffros.blogspot.com
PHANTOM DANCER
Greg Poppleton is Australia’s only authentic 1920s – 1930s singer. He’s been leading his own 1920s-30s bands and orchestras since 1994. He has also presented The Phantom Dancer on 2SER since 1985.
The Phantom Dancer is a non-stop mix of swing and jazz from live 1920s-60s radio and TV.
On 2SER Tuesdays 12:05-2pm, Saturdays 5-5:55pm.
DATE POSTED
Tuesday 28th of&nbspJuly, 2020
CATEGORY
SHARE
SUPPORT US