A Girl in a School Uniform (Walks into a Bar) 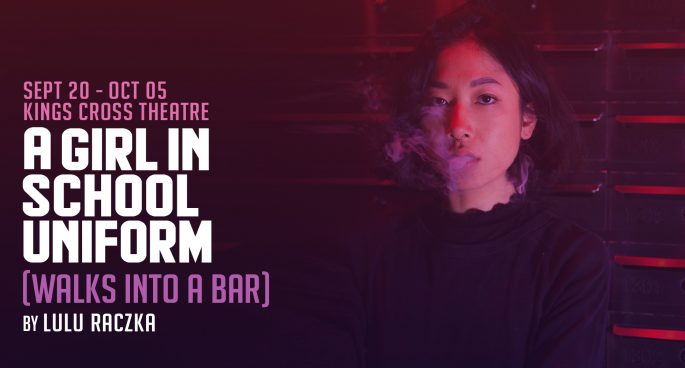 A Girl in a School Uniform (Walks into a Bar) by Lulu Raczka is a new play premiering in Australia this September. Tess spoke with Hannah Goodwin the director of the play, about turning the tables on the traditional narratives of violence, women and victim-hood.

A Girl in a School Uniform (Walks into a Bar) By Lulu Raczka. September 20 – October 05

It’s the future. But only slightly. There are blackouts. And when blackouts happen, women disappear.

This searing and spellbinding play written by one of the UK’s most exciting young playwrights, Lulu Raczka, is a ferocious indictment of violence and a rallying call to anyone who regularly fears it. Set in an alternate reality uncomfortably close to our own A Girl in School Uniform (Walks Into A Bar) is a thriller about two women coping with fear in the dark.

This production is supporting Mary’s House (supporting women and children dealing with domestic violence) and is in partnership with XFighting: women’s only self-defence workshops (empowering women, building strength and dignity).

On Sunday September 29 there will be a free women only self-defence workshop on the Kings Cross Hotel rooftop after the matinee at 5pm. To book in follow the link.

A Girl in a School Uniform (Walks into a Bar)