A Tight 5 with Tina Zaman 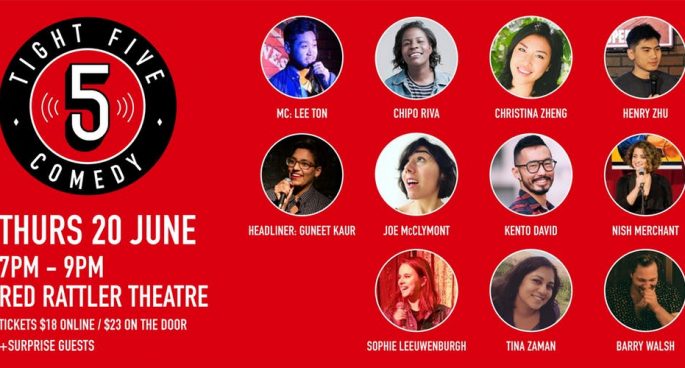 Sydney has a new monthly comedy night, with some of the most in-demand comics representing 4 continents and all the colours of the rainbow showing off their best 5 minutes in the only event of its kind in Australia. It’s called Tight 5 Comedy and takes place at the locally famous, volunteer-run Red Rattler Theatre in Marrickville. Its founder and executive producer, Tina Zaman, is a first-year comedian herself and a university writing instructor from California who’s already creating space for queer people of colour, women and their many local allies.

Noticing that even the best comedic writers don’t get a shot at established venues, Tina uses the intersections between excellent writing and underappreciated comedy to book the right talent for Tight 5 Comedy shows. Their lineup promises “the rawest, realest stories and guaranteed laughs from Sydney’s comedy subculture” and had a packed audience at their 18 May premiere, where the acclaimed Suren Jayemanne served as MC. Tina swung by our studio to chat to Bryce about her writing, the comedy landscape in Sydney and the importance of inclusivity in producing comedy shows for real audiences. You can get tickets to the next Tight 5 Comedy night featuring Lee Ton from Melbourne and Sydney’s own Guneet Kaur here.

A Tight 5 with Tina Zaman