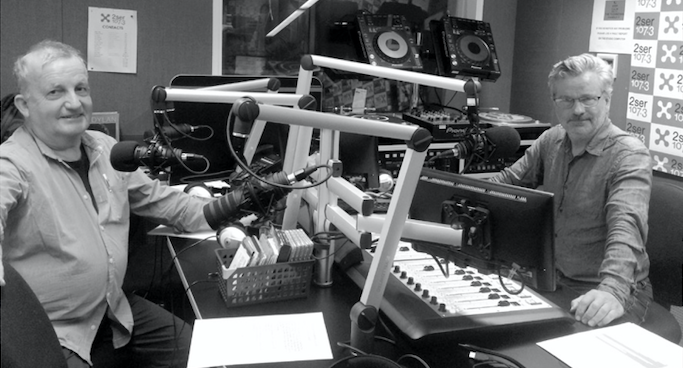 First published as Chapter 24 of

An Incomplete History of Community Radio: 2SER’s 46 Boxes of Stuff

By Liz Giuffre and Demetrius Romeo

“In the mid-’80s, you felt lonely as a Bob Dylan fan,” Bill Kitson confesses. “It was not a good period for him.” Bill is reminiscing about the origins of the Bob Dylan Birthday Special, also known colloquially as ‘the 2SER Bob Dylan marathon’, an epic annual broadcast that began in 1985 thanks to lecturer Arnie Goldman. Kitson had returned to tertiary study – as a mature-age student – at what was then the Institute of Technology. “I forget which class it was supposed to be; it was about William Blake, and Arnie would frequently digress and start talking about Dylan.” This being the reputedly ‘bleak’ era for Dylan, and Dylan fans, Bill warmed to a fellow admirer. “I told him how I’d been a fan for 20 years and he said, ‘Ah! We’re doing a radio show.’” 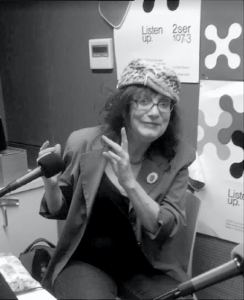 Robin Weston concurs: “It was believed by many people that Dylan’s gospel phase signalled the end of his complex career.” Robin co-presented 2SER’s Sunday Arts program with Goldman (whom, she confirms, lectured in English at the Institute of Technology at the time). “Arnie and I both shared an appreciation for the poetry and the music, feeling that Bob had the right to express his visions as he pleased,” she says. Hence, they’d continued to feature Dylan’s music on Sunday Arts despite Dylan’s seemingly waning popularity. Together, she and Arnie devised the 1985 Bob Dylan Birthday Special as “a one-off; a bit of an indulgence in the face of overwhelming disapproval.”

According to Bill, the show was “basically Bruce Williams’s idea” to try to play every Dylan album back-to-back. “Back then you almost had enough time to play them all,” he says. “Arnie put me onto Bruce and I became part of the program.” Robin, on the other hand, traces antecedents and precedents of the 2SER Dylan marathons to Minnesota at the turn of the ’70s. Goldman had pursued his postgrad work – studying Shakespeare – at the University of Minnesota, which was ever-so-briefly Dylan’s own Alma Mater. It was here that Goldman’s enthusiasm for radio began, Robin says, with Minnesota Public Radio – formerly Minnesota Educational Radio. It was at University of Minnesota, she adds, that Dylan “transferred his attention to folk,” having previously been into rock’n’roll; the young Bob had even started bands influenced by Buddy Holly, Elvis and the blues.

“Much of the lyrical power of Dylan’s work and understanding of human experience derives from what would become a very profound study of the folk tradition,” Robin says. Arnie, meanwhile, had a puritan approach to poetry that only began to dissolve when he finally acknowledged that rock ’n’ roll and poetry could co-exist in the same [body of] work. Subsequently, in the late-’70s, Arnie partook in “the first all-night Dylan party” celebrated in New York on Bob’s birthday. “And they hadn’t got through all the music overnight, even then!” Robin says.

The first on-air party celebration of Bob Dylan’s birthday began, according to Robin, “as a sort of a joke” between her and Goldman, in defiance of the critical atmosphere of the time. “We were joined first by Bruce Williams, trained in journalism and poetry, who had more radio expertise than the rest of us put together. Bill Kitson, then a student, joined us with his encyclopaedic knowledge of every song and every album.”

Bill recalls the first couple of shows as lasting “ten hours,” whereas Robin remembers the first one in particular as, truly, a marathon: “fifteen hours – we started at 4pm and finished up the next day at 7am, and we were arguing about the things that still needed to be heard in the last hour.” Still, both vividly recall that the first Bob Dylan Birthday Special won an award: “the Sonic Magazine Award for the Most Creative use of the Medium of Radio,” says Robin. “The person who presented it was John Howard!” Bill adds. “He was Opposition Leader at the time.”

Nowadays, Bill reckons they’re getting old; “six hours” is enough of a marathon. “Actually,” he adds, “it goes from 8pm to four in the morning – eight hours. We’re in the studio until 2am, then we put on two hours of pre-recorded stuff.” The hosts receive a lot of input from the Bob Dylan Society, a Sydney-based group who convene monthly and bring each other up-to-date about whatever Dylan-related news they’ve heard since their last meet-up. The Marathon usually begins with a “new, different, rare, unusual…” selection – Dylan’s recent cover versions of other people’s songs, or new and “completely different” arrangements of an old song; “anything that’s new!” However, about half the Marathon is essentially about playing requests.

“After all these years, you wouldn’t think – in this period of modern technology – that people still like to ring in and request a song and then wait for it to come on.” Although, ‘modern technology’ plays a part: since 2SER is online as well as on air, the show’s been known to receive call-ins from as far afield as New York and India!

While the length of the broadcast may wax and wane, listenership has continued to grow. One of the more recent broadcasts was heard by more than 4,000 people – not just Sydney-based fans tuning in on the wireless, but fans listening online from all around the world. Considering it all began with a handful of community broadcasters sharing a love of a durable musical poet for a laugh, the endurance of the Bob Dylan Birthday Special is impressive indeed – as Robin concurs: “We certainly didn’t expect to launch a long-running and iconic ‘Event’.”