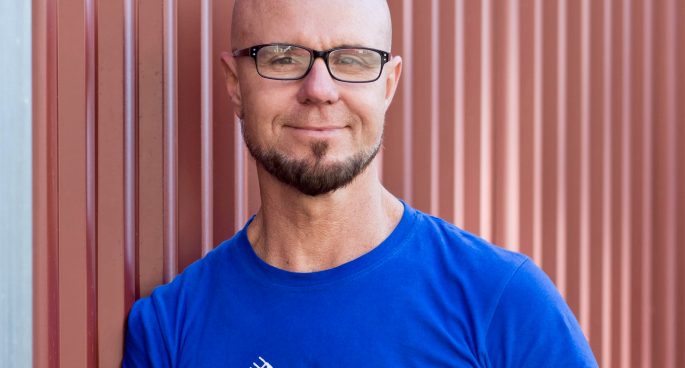 Dean Walsh joins Regina on Stages to talk about his life on and off the stage. His work  Context Is Everything – the “performed archive” of his thirty years in dance, can be seen in September for Sydney Fringe Festival at PACT in Erskineville.

Dean is an award-winning Australian contemporary dance and performance practitioner, teacher and writer. He is Autistic (higher functioning) and identifies as living with disability through a co-morbidity of ADHD and Complex-PTSD that influences his Autism and life significantly.

He has been at the forefront of many major shifts within the Australian arts and cultural landscape since 1991 and has crossed over several sectors within the arts and environmental science communities, having extensive involvement in, and a passionate advocate for, the national contemporary dance, queer performance and disability-inclusive communities, as well as the environmental science sectors – all progressive developments throughout his career.

2019 has been a big year of activity centred around the construction of a new company iSeaa (Integrated Science, Environment and Arts Access), with life and professional partner, Andrew Batt-Rawden, and several other key artists living with and without disability). He was awarded the inaugural CreateSpace 2 week Residency grant of $5,000. This is a new initiative from Sydney Opera House, AusdanceNSW and FORM Dance Projects looking to support dance artists in NSW who identify as living with disability. Dean used this period to develop his piece Threshold: NRC with composer Andrew Batt-Rawden, costume designer Kate Shanahan and lighting designer Fausto Brusimolino. The work is now called EGOsystem and will have it’s premiere at Riverside Theatres, Parramatta in late 2020 and hopefully Sydney Opera House in 2021.

In 2018, with assistance from several key people (including Andrew), he created a new full-length (60-minute) solo, Threshold:NRC, for PACT Theatre’s (centre for emerging artists), inaugural inter-generational program called AFTERGLOW: Generations. This was a double bill with emerging choreographer, Cloé Fournier. He and Andrew performed a 15-minute duet distillation of Threshold:NRC called Dying to Sea for the 3rd annual Sydney Festival of Death and Dying performance evening.

In November 2018 he produced a 2 hour solo “performend archive” for East Sydney Community and Arts Centre (ESCAC) annual performance program ‘The Flying Nun’. This piece was called ‘Remote Control’ and was in association with UNSW, Sydney Uni, the State Library and Critical Path (the national choreographic research centre).

Between 1991 and 2008, Dean’s focus was on devising performance works – over 20 solo and group – wrestling themes relevant to; war veterans and their families, survivors of domestic violence (including homophobia and sexual abuse), dissecting notions of Australian masculinity and themes relevant to the Australian LGBTIQ community. He now openly identifies as living with both acquired and congenital ‘hidden’ disability – high functioning autism, ADHD and complex trauma disorder. He is a passionate advocate for the promotion of a national awareness on accessible arts practice and the support needed for individuals and smaller companies to fully, and authentically, engage their own practice in the arts an achievable, equitable and higher standard in how works made by or featuring PLWD is embraced as seriously as the rest of the community.

Since 2009, and assisted by a prestigious Australia Council for the Arts two-year dance fellowship (2011-2012), Dean has developed an interdisciplinary, marine-environmentally influenced movement methodology and renowned practice known as PrimeOrderly. Utilizing this, he choreographs new work, facilitates movement classes and workshops and presents lecture-type demonstrations at arts and environmental events, including the World Parks Congress 2014. held in Sydney at Olympic Park Conference Centres.

Since 2010 Dean has worked with several disability-inclusive companies, including Restless Dance Theatre (Adelaide), Murmuration (Sydney) and has been a key collaborator with performance ensemble, RUCKUS since 2011 and in 2016 toured with them to Epic Arts in Cambodia. He has also instigated several successful workshops under his own practice.

Several of his works have toured nationally and internationally. In tandem with his extensive solo career, he has worked for companies; ADT (Adelaide) and Stalker Theatre (Sydney, as choreographer + performer), DV8 Physical Theatre (London) & No Apology (Amsterdam) – both made possible through his being awarded the coveted Sir Robert Helpmann Scholarship 2002 – among many other reputable project-based Australian companies.