Dictionary of Sydney: The Murder of Joseph Luker 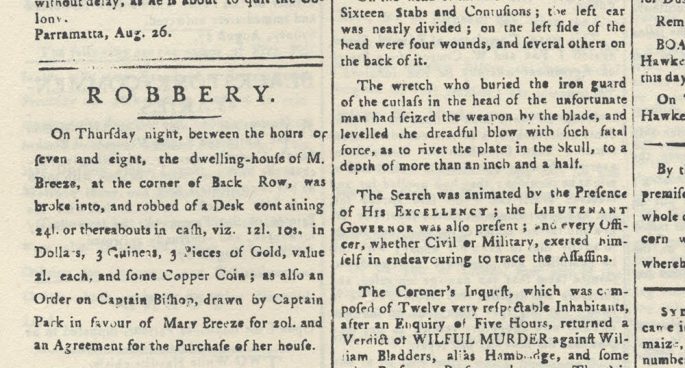 Life in the convict colony of Sydney was rough – but the barbarity of this murder shocked and horrified even the most hardened crim.

Late one night in 1803 police officer Joseph Luker was accosted by a group of thugs in Phillip St, who was belted by a stolen desk, the frame of a wheelbarrow and by the hilt of his own cutlass which was used against him with such force “as to rivet the plate in the Skull, to a depth of more than an inch and a half”.

With police unable to prove who killed Luker, the case became the first “cold case” in Sydney – and the first one to be serialized in newspapers.

Dr Rachel Franks from the Dictionary of Sydney talked to Tess this morning about the murder, in all of it’s gory detail.

Dictionary of Sydney: The Murder of Joseph Luker