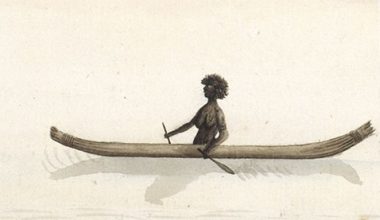 You may think of the inner-city suburb, and not the fierce Cameragal clan woman, when you think of the name Barangaroo. A skilled fisherwoman, Barangaroo was one of the most powerful figures in early Sydney history. After losing a husband and two children to smallpox, she remarried to Bennelong whom she continually challenged. While other Eora women agreed to wear clothes given to them by the British, Barangaroo refused – instead only wearing a slim bone through her nose. She was unhappy with her husband’s consorting with the colonial government, and it was said that she was among the women in 1788 who tried to lure white men ashore so the Cameragal warriors could attack them.

As NAIDOC Week continues, Dr Nicole Cama from the Dictionary of Sydney came in to chat to Nic more about the incredible life and times of Barangaroo.