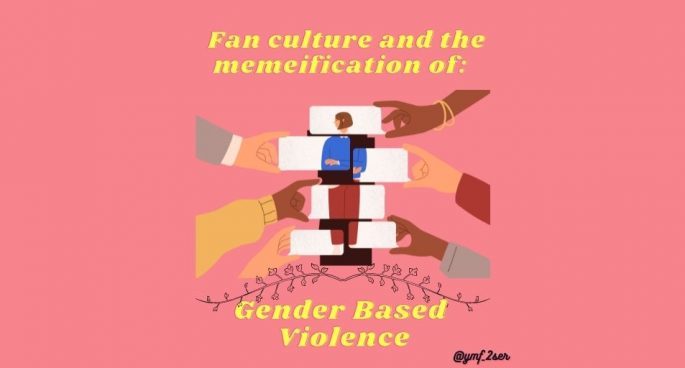 This week on YMF Beth and Belle dissect the dangerous outcome of when memes and fan culture intersect with gender-based violence cases, examining the recent example of the defamation case between actors Johnny Depp and Amber Heard. This 24/7 coverage of this case, has led to a unique reaction from the public – the memfication of the trial
including edited clips of deposition with comedic music, trivialising hashtags such #Amberturd, and much more disturbing posts all in the hope of going viral. Despite being found guilty in a similar case in 2020, Johnny Depp has received much more support from the public, with many fans standing by his side. So why do celebrities still have fans despite being accused, or being charged with violence? The Answer? Parasocial relationships, or in other words: ‘one-sided, intimate emotional bonds that we develop with public figures or fictional characters’.  These can be good things, at times bringing us comfort; making us feel less alone. However, they are at times dangerous, when the public demonstrates unflinching loyalty to a public figure despite not knowing them personally
What kind of impact will this memeification have on other victims of gender-based violence? Check out the latest episode as hosts Bethany Tracey and Bella Michie speak with Maddie Brockbank, Master of Social Work/PhD Student from McMaster University.

‘Yours, Mine & Femme’ is a segment in which we put a spotlight on issues affecting women/feminine identifying persons of all ages, cultures, sexualities and abilities. To catch up on past YMF episodes or to make sure you don’t miss a story, follow us on Instagram and Twitter @YMF_2SER