What you’re worth by Library Siesta 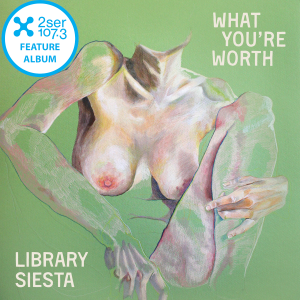 The feature album this week on 2SER is the sophomore from local Sydney dream-pop auteurs Library Siesta.

Written over six years, and beautifully produced with an open and spacious recording style, What you’re worth is on the surface a soothing ride through sweet and open indie-pop with a hazy and bright aeshetic. Following on from 2015’s Future Haunts, this is that clearly gel together, and musically this ebbs and swells across it’s elevent tracks. However, the sunny compositions give a shiny gloss that contrast with lyrical content that frequently deals with abuse, heartbreak and mental illness.

As well as the excellent playing on this, it’s the juxtaposition between the lighter pop aesthetic and brutally honest storytelling narrative that raise this into a truly compelling listen, and it’s an album as real as they come. Highly recommended.

Out now independently on Vinyl and Digital

2SER subscribers can win a vinyl copy via the usual way.

Previous
No Photographs by Workhorse

Next
Pre Pleasure by Julia Jacklin