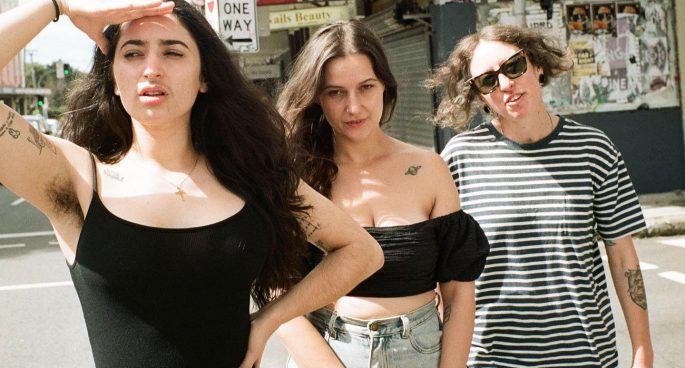 Tuesday Drive’s Felix Shannon speaks to Georgia Maq, the lead vocalist and songwriter for Melbourne’s Camp Cope, about the band’s ongoing album tour and how their recently released album ‘Running with the Hurricane’ represents a major change in both their sound and performance.

Establishing themselves as a prominent voice in the Australian music scene and beyond with their self-titled LP in 2016 and sophomore LP ‘How to Socialise & Make Friends’ in 2018, Camp Cope returned this year with a new album in late-March. The trio – Georgia Maq, Kelly-Dawn Helmrich, and Sarah Thompson – have kicked off their national tour in Brisbane; with Sydney, Melbourne, and Castlemaine to come.

Their recent album marks a major shift in tone from their two previous records. While there remain elements that are unmistakably Camp Cope, the record brings with it a greater sense of reflection, and assumes a more relaxed tone both sonically and lyrically, essentially shifting from ‘power emo’ and punk to more alt-country and alt-pop.