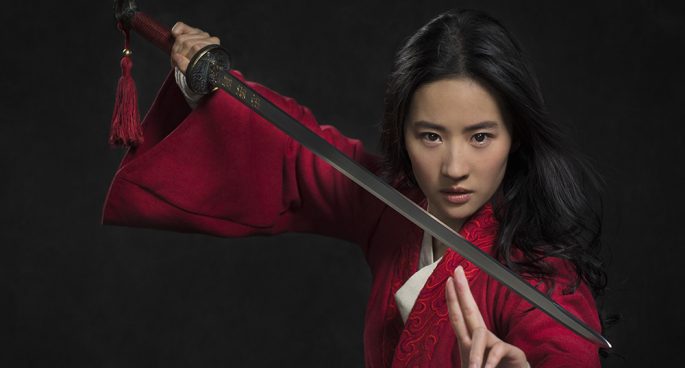 Disney’s live action of Mulan may not bring honour to anyone.

When the live-action remake of Mulan was announced, Disney lovers everywhere rejoiced. The story of Fa Mulan, the Chinese girl who took her father’s place in the war while impersonating a man, with her trusty sidekicks – a sassy horse and an even sassier dragon. A beloved classic due to its heart-warming tale of filial duty, light-hearted comedy, and catchy music to boot. However, when the official trailer for the movie was released in July, fans were disappointed to see that the movie would not include many of the characteristics it was so loved for. “No music? No more pansexual hero Li Shang? And NO MUSHU???”, was the outcry. Instead, the live action was destined to be a feminist action movie, based truer to the original Chinese legend of Hua Mulan. More controversies follow the making of this film during the political unrest in Hong Kong.

As the pro-democracy protests in Hong Kong had reached its 7th week, leading actress of the 2020 remake of Mulan, Liu Yifei (刘亦菲), re-blogged (now removed) posts on her Chinese social media page Weibo supporting the Hong Kong Police Force in their actions taken against the protestors. 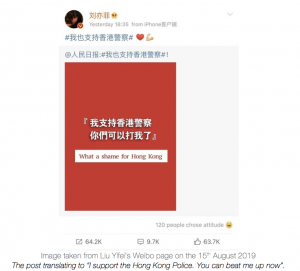 After the posts went viral online, Hong Kong citizens were furious leading to the trending #boycottmulan on Twitter. With the escalating political crisis in the city, the police have been using excessive force to deal with the movement, such as teargas and beating civilians in subway carriages, even allegedly colluding with triad members to pose as “agent provocateurs” to discredit the protests and label them as riots instead. Social media users were also quick with pointing out the hypocrisy of Yifei, as she is a dual citizen of both China and America.

“Isn’t she a Chinese-American actress? She enjoys freedom in the US but supports the CCP. The irony…” a Redditor comments.

However, a closer look at the viral post may not be all that it seems, as Mainland Chinese celebrities are often used as political figureheads in China. On the same day, and around the same time that Liu reblogged the posts on her social media, so did many other Chinese celebrities. It would seem that these are a strategic organised effort by the government to control narratives on their social media. 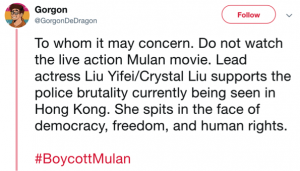 While Disney has not directly responded to the controversy, they are unlikely to change the movie at all as the film is now in post-production. After the PR crisis from this political input from Liu, some are anxious about how these events have affected the rising Asian representation movement in Hollywood; questioning whether casting directors will be wary of casting actors of Chinese descent for the possibility of another public relations crisis. But, with China being a large economic force, as well as being such a huge market from which companies like Disney stand to make significant profits from, it can be assumed that this will not be an issue.

The live-action Mulan will go ahead as planned, being released on the 27th March 2020 in the US. Whether the boycott trend will carry on until next year is unsure, but I have to ask, how does one boycott a movie they were never going to see anyway?