A new program produced by the Community Broadcasting Association of Australia’s Amrap project has seen a slew of very high profile Australian acts take to the airwaves to promote Australian music on the radio. Artists including Sampa The Great, Alice Ivy, The Teskey Bros, CLYPSO and many more have featured over 2020 so far.

Last week’s episode was a massive coup, Dave Faulkner from Australian rock legends Hoodoo Gurus took the host seat to discuss his favourite tunes, and you can listen back to the episode right here on the 2SER website.

As an extra treat, Dave used the program to launch the band’s brand new single Hung Out To Dry. It’s a track originally thought of as the band’s next’s B-side, then they decided it needed its own space, taking aim from lockdown at a bright orange target across the sea (guess who?).  The no-holds barred tune dropped marks the beginnings of a new album to be released next year. 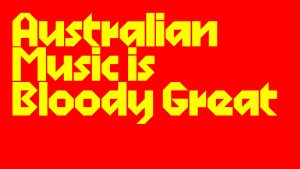 Featuring topline Aussie acts talking up and playing their recent Australian music faves, Australian Music is Bloody Great is a program not only to discover the incredible range of sounds being produced in Australia, but it’s also a reminder to share them and support our artists.