Hypocrisy, Controversy and Unease: The Fight to Replace Ruth Bader Ginsburg on the Supreme Court 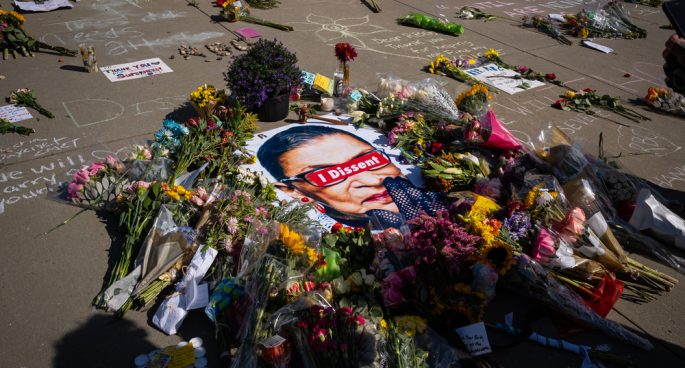 As the one-month anniversary of the death of Justice Ruth Bader Ginsburg approaches, the dust that has settled has been a cloud of debate and controversy.

Finding a replacement for her position on the Supreme Court has been tainted with hypocrisy.

“[This was] a fight that was fought hard for a few minutes, then somebody drew their gun…. And the bad guy won,” states Ed Blakely, American politics expert and co-host of 2ser American news and politics podcast, US of Ed.

By “bad guy”, Ed refers to Senate Republican Leader Mitch McConnell. In a similar scenario in 2016, McConnell rejected former President Obama’s nomination to replace Justice Antonin Scalia a few months before the election. Now four years later, and only a few weeks out from the election, McConnell has promised a vote as soon as possible.

“You don’t want to be doing dirty tricks because that energizes the other side… the best thing is to delay it for a very long time,” claims Ed.

Heading into the election, Republicans are eager to place their vote in support of President Trump; however, Democrats are not as enthusiastic to head to the polls.

“How can you get 102% of democrats?” Questions Ed in relation to inspiring more democratic voting.

As of August to September this year, Democrat support outweighs Republican support by 1%, with identified independent supporters also leaning more towards the Democrats.

Perhaps with the actions of President Trump already making moves to produce nominees for RBG’s spot as well as the support of Senators such as McConnell, this will inspire more Democrats to flock to the polls come election time.

One thing is for certain, the debate and controversy that has ensued since RBG’s death, “goes against everything Ginsburg was for,” Ed states.

The life and legacy of Ruth Bader Ginsburg will forever live on, however the current state of the US conflicts with the message of the peace and equality she left on the nation. As of a few weeks prior, the US has toppled over 200 000 deaths from COVID-19, with this tragic number only continuing to rise.

“Almost everybody in America knows somebody… who died from this disease,” Ed claims.

With the failure of protecting citizens from COVID-19, police brutality, growing tension among the US and Iran and rising civil unrest, the image of the strong, independent United States of America has slowly washed away.

With the loss of RGB, perhaps the US is in need of a new hero. Hopefully, in the next 4 years prior to the 2024 election, the nation will stand a little taller, stronger and healthier.

Listen to the full US of Ed Special on Ruth Bader Ginsburg here.