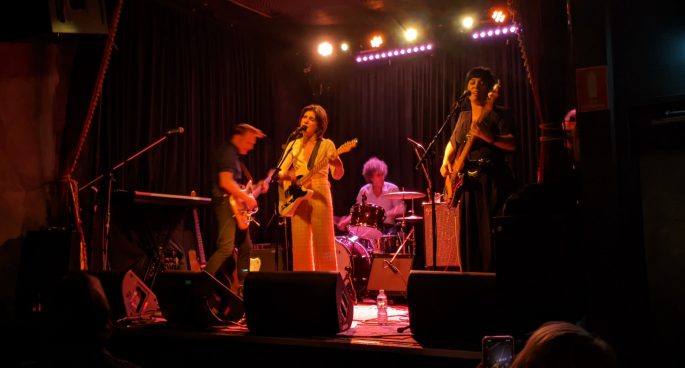 “No whistling, singing or yelling”, reads the signs at the entrance to The Vanguard on King Street in Newtown. The venue was one of the first to re-open after the pandemic decimated the hospitality and live music venue scene in Sydney and it has been putting on seated, distanced live music for months as a bastion of hope and determination.

The crowd arrived early to snaffle the front tables at the ornate venue and also to catch the energetic, passionate and cinematic set from Jack Colwell. Appearing as a greater than apt replacement for Le Pie, the solo multi-instrumentalist enthralled with tracks from his album, SWANDREAM. His fingers danced over the keys as his raw and passionate tales of family and life sometimes growled, sometimes glided, but always touched us.

Colwell has the ability to affect his audience, be it with the gritty vulnerability in his voice or the heart-wrenching song-writing, which winds around minor chords as easily as major but can make us change moods with the flick of a wrists. The Sound of Music and Home Again, with its soft and somewhat pretty story-telling, makes way for PTSD and Colwell on guitar, strumming with vigour as he lets his inner beast out in a track that made heads turn in the otherwise laid-back venue. It’s this musical menagerie that kept the audience enthralled and eager to show their appreciation.

The path that Lisa Caruso has taken to this point, her debut album launch, is etched with yearning, passion, pain and – ultimately – triumph. The night itself, with two shows performed in front of family, friends and fans speedy enough to grab tickets, must have been like a cathartic release for the Sydney singer-songwriter so used to performing and one that can surely be marked as a significant achievement in a year that has taken so much from us.

In Feelings, the debut album in question, lays Caruso’s vulnerabilities and passions out for all to see and hear. With it, comes the trust that it will be received and appreciated in a manner deserving of the effort that has gone into its creation. That attention and warmth was reciprocated in waves from the adoring crowd for the first performance.

There is nothing better than listening to an album from start to finish, as it is intended. Well, actually, there is – listening to said album from start to finish – live. With an all-star band backing her, Caruso dove straight into Shake Baby Shake, the opening track and treated us to a live performance that weaved its way through the emotion and, yes, feelings of the record. The guitar that we’d heard on the record sounded so beautifully full played live, especially in the hands of Ben Fletcher (Bluebottle Kiss, Devoted Few, Sarah Blasko), whose craft can be heard predominantly throughout the recording. The drumming from Cec Condon (The Mess Hall, Roadhouses) was precise, perfectly balanced and complimented the drive of the rhythm with Emma Hoy on Bass and Daniel Babekuhl on guitar. All-stars!

The album, with its twists and turns is navigated by the charisma and warmth of the artist herself. Caruso, making sure to take moments to soak it in, smiled at and acknowledged the crowd, and danced with serene joy in A Holiday as well as screaming “iiiiii” with passion into the sold out venue. A highlight of the night, I Feel, with it’s subtle drums and airy guitar, filled the space perfectly, giving us a chance to experience the full range of emotions.

Caruso rounded out the album solo, with a track, Onto the Fire, that throws back to when she would do so regularly – armed with just an electric guitar and that unique voice. A voice that can bounce from pure honey to glistening falsetto in the twinkle of an eye and on such a big night was absolutely faultless. A cover of Shangri-Las’ Dressed in Black was a delightfully sad way to finish off the night that we didn’t want to end.

The evening was a brilliant return to live music for many in attendance and in a year that has taken so much from all of us, it was a chance to not only give something back to a struggling arts industry, but to gain that feeling you can only feel after witnessing an amazing live gig. We may have broken the rules – just a little, but if you can’t whistle, sing or yell have you really been to a show?