Melita Rowston and a revenge tale! 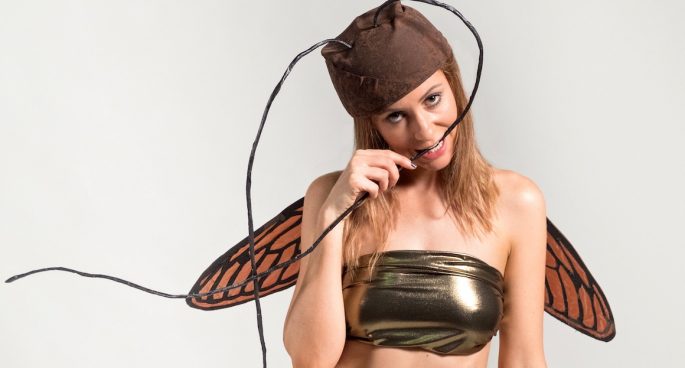 What happens when you mix Ovid, Kafka, #Metoo and a grunge music score?

You get a cockroach, or course.

Or in this case you get a trans-formative tale of revenge on stage as part of the Sydney Fringe Festival.   Melita Rowston joins Stages to talk about how to write a one woman show that takes in hand the four letter word starting with R and make a theatre show.

Cockroach is a hilarious prose poem/grunge cabaret about female anger. Disrupting Kafka’s and Ovid’s Metamorphoses, Melita Rowston and Leah Donovan address the issue of violence against women with more violence! There will be no apologies. We are done with smiling politely.

Cockroach is an anthem for our times: furious, funny and hopeful.

When C wakes from a nightmare, she finds herself transformed into a monstrous vermin. For too long, she’s been told there’s something wrong with her. For so long, she’s yearned to behave badly. Tonight’s her night of reckoning!

Join C on a bloodcurdling bar crawl as this avenging exoskeletal anti-heroine rises from the ashes of abuse to become the true definition of a pest.

Part free verse poem, part dance theatre, part grunge cabaret, this riotous urban-noir adventure subverts the patterns of rape in Ovid’s Metamorphoses to explore the silencing that follows abuse and the transformations that occur recovering from it – in a very contemporary way.

Continuing their collaboration born during the Sydney Mardi Gras hit MilkMilkLemonade (2013). Writer/Director Melita Rowston and performer Leah Donovan aim to find a loophole of laughter in the tragedy of abuse, to dance the badness out so healing can take place. Featuring a live score by Benito Di Fonzo smashed together with vintage Casio, percussion and Fender Strat, Cockroach is also about peeling off our armour so we can be seen.

“When women feel anger, they feel guilty, so they turn it on themselves. In this new #metoo era, performance is a home to go to, a place to take the shame and rage and fear and stare it in the face. In this space, we can find our voice, wrestle with it and shape it into something transcendent, funny and beautiful.”Melita Rowston and Leah Donovan.

NIDA graduate Melita Rowston is an STC/Patrick White Playwright Award finalist for Between the Streetlight and the Moon, (KXT, 2017). She has toured her award-winning fringe hits THE GIANT WORM SHOW!, Ljubicica: Wild Violet and 6 Degrees of Ned Kelly extensively. SITI graduate Leah Donovan returns to Sydney from NYC after performing with her theatre collective Future Husband. In 2016, she won The Edinburgh Fringe Stage Award for Acting Excellence forPlease Excuse My Dear Aunt Sally.

“Boldly put, this is the best play that I have seen this Fringe Festival, and is right up there as one of the best pieces of theatre I have ever seen.” Ljubicica: Wild Violet (WINNER: Best Music) The Buzz From Sydney

“Rowston’s mission has a palpable sense of purpose. In these infinitely more cynical times, are we still able to come together as a community?” (WINNER: Adelaide Fringe Artist Fund) THE GIANT WORM SHOW! SMH

“Leah Donovan is given free rein to make crazy… She delivers a karaoke show-stopper with Charlene’s I’ve Never Been To Me.” MilkMilkLemonade, SMH

Melita Rowston and a revenge tale!