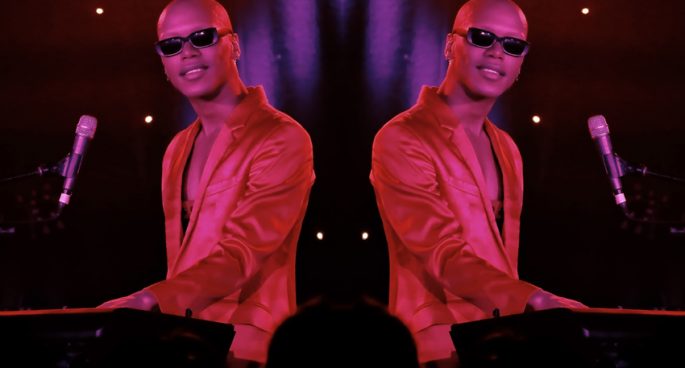 One of the stars Nakhane counts among his muses is the very theatrical Grace Jones. He recalls her saying: ‘if you want people to believe you, you have to believe it first’. Another is the always daring Nina Simone. He observed that she always ‘followed every muse, whether it was a good muse or a bad muse’. See and hear anything from this artist and his choices make complete sense. But Nakhane has taken his muses’ need for belief, and willingness to venture into troubled waters to extremes in his short career so far, and at times it’s made life tough for Nakhane. If being openly gay in his native South Africa didn’t get enough negative reaction there, then his starring role in 2017’s The Wound as a gay man who mentors a younger man through initiation, was a step too far for most, and it brought to Nakhane’s feet a barrage of death threats. You have to be brave to face that kind of violence and decide to continue, unyielding. Maybe the title of his latest album is the reaction, a faith-building note to self – You Will Not Die. 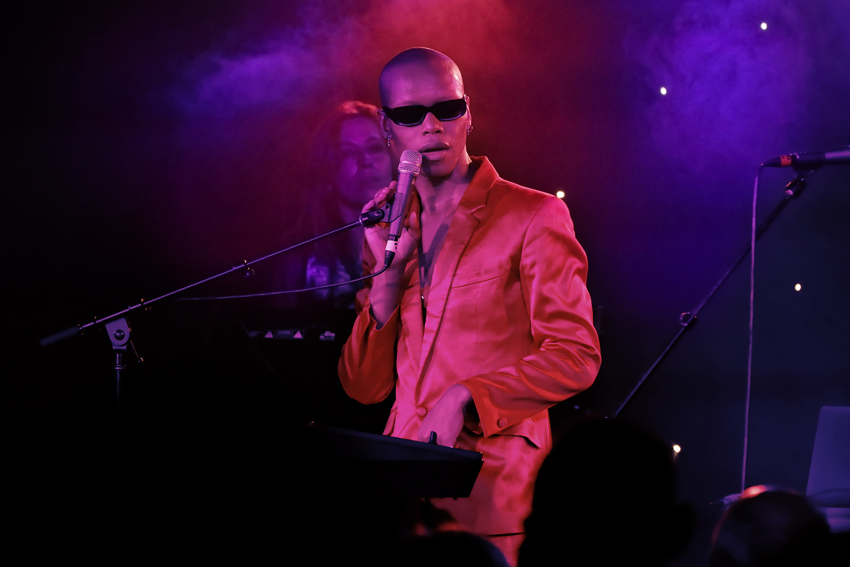 Nakhane has now dropped the use of his last name, Toure, and is beginning to attract similar degrees of critical acclaim as some of the other glam-pop superstars who before him did the same. His discography only stretches back to 2012, but all the songs are so unique, and so assured, all bearing a now trademark heart-breaking honesty. One early ode, My Jonathan, from 2013’s Brave Confusion is a love song like no other. It is beautifully sparse and meandering, with a pounding rhythm and loping acoustic guitar riff that breaks off into the chorus with gorgeous swirling violin strains, and then there’s … THAT VOICE! Don’t mind what I said / I was driven by hunger / Don’t mind what I said / I was driven by death / But I still love you / I hope that you do too. I dare you to hear My Jonathan and not straight away want to be – his Jonathan. Check out his cover of The Cure’s Just Like Heaven. Another stand out from Brave Confusion – and one that’s given a re-working on the new album – is The Dead. The title misleads though because this is yet another life affirming rhythmic anthem, and a call out into the dark for the light of love and fulfilment. I’m gonna love them unceasingly / Sing hallelujah sort of willingly / And dance in front of god like David did. Both the vocal acrobatics and the ease with which they’re performed – are breath- taking. Oh, and hey – for proof that Nakhane is more than just a musical artist, see the riveting – if slightly claustrophobic – official clip for The Fog (2013). It’s a visual stunner in black and white. Then there’s the recently released clip for one of the best tracks from the new album – Interloper. A colour-soaked rhapsody! Not since the miraculous arrival of Jimmy Somerville in the early eighties has there been such an artful and determined queer presence in music, one that is as bold as it is camp, as political as it is prosaic, but always uplifting, with no compromise in content or style. Both musically and visually Nakhane wants to make things of great beauty. It is urgent for Nakhane. He is stopping time to express all his love and anger, and by now he must be learning that folks are wanting much more of it. In his live show at the Magic Mirrors Spiegeltent for Sydney Festival on Friday night, Nakhane had all of us caught in his spell. From the moment he stepped out slowly through swirling mist and gold light, in a slinky red satin suit jacket and slacks, it was art. No shirt under the jacket, just tight brown flesh and what he’d later refer to as his ‘fetish harness’, also in red, because ‘the red and black striped one they had was just too tacky!’ Then, with his focus very much on delivering key moments from the new release You Will Not Die, we were away! There’s much less of the acoustic guitar and traditional percussion from earlier works, and more of a club beat infiltrating the new tracks. The hot gooey squelch of synths, and some beautifully constructed fuzzy electric guitar riffs (he really does rock out on guitar!) All of those new sounds are welcome. But still, everybody’s talking about … THAT VOICE! Clarion clear, it can soar through an incredible range, up into a quivering falsetto, and all the way down to an arresting bass, birthed from a breath that is almost other-worldly. As a self-described ‘good Christian boy’, Nakhane loves the sounds of gospel too, and he uses those early influences on his music to fine effect to get his own messages out. Teen Prayer is one such offering from the new album. It sounds like almost any hymn you may have heard: repeating lines hinting at a revelation. So soothing and arresting you feel that if you sing along there’s a chance you’ll be healed. But like so many of Nakhane’s offerings, it takes some unexpected detours … Lord in your house / When the boy comes in, I’m falling / He pins me down / He moves in me / He keeps me crawling. In the performance of it, we’re all moved so much, we find stillness. So much so we forget how we’d just laughed with him when – with a camp little giggle – he introduced it as a ‘hymn about anal sex’. And we laughed again when he told us how his grandmother approves of the song. Through his muses, Nakhane is believing … And Nakhane is funny. In between songs, he keeps daring to start a debate on sexuality with his young smart male drummer, Keir Adamson, but says he won’t tonight because the tour’s young and he must pace himself. After dancing and laughing with Keir through the outro of another track, Nakhane points at him and looks to us, asking: ‘Shall we keep him? Yes! We’ll keep him. He’s a keeper!’ His connection with his young and very accomplished female keyboardist / guitarist and vocalist, Charlotte Hatherley, is just as charged. In instrumental breaks, he grabs eye contact and moves joyously, apparently wanting to dance with her more than he wants to perform for us. You can tell she’s blushing. And lucky for us that the Spiegeltent was in dance-floor mode. Young and old got their groove on with Nakhane, mirroring the singers lithe and suggestive moves and energy with some of their own. It was fantastic to see such a mixed crowd letting loose and connecting to the messages of the artist, and showing such true appreciation. Yes, we could have had Nakhane to ourselves for a little longer if the Spiegeltent didn’t have to turn around for the next show. Yes, it would have been great to hear one or two of the earlier tracks (My Jonathan!). With Nakhane, you’d always be wanting more. He is forever in the moment like every performer should be, so present he could build rapture with ease, and with Grace Jones & Nina Simone forever perched up there on his shoulders, we’re in extra good company. 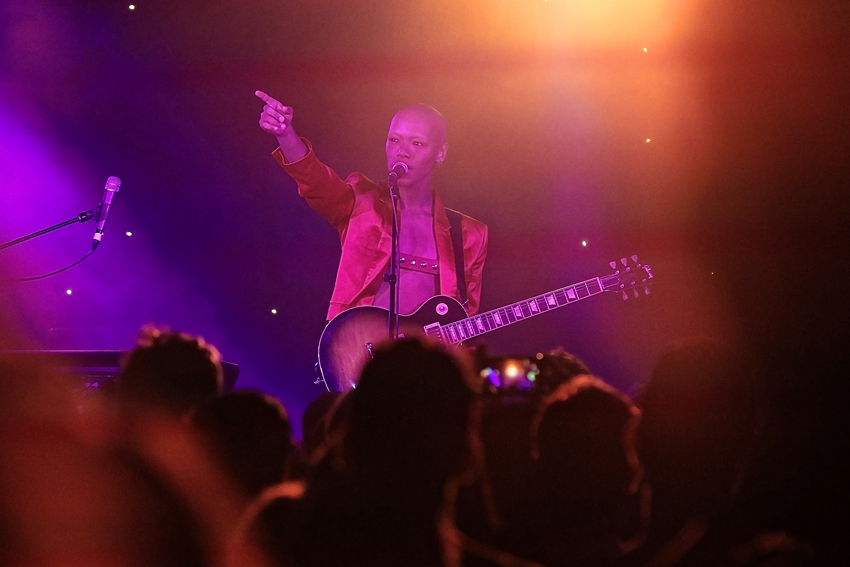 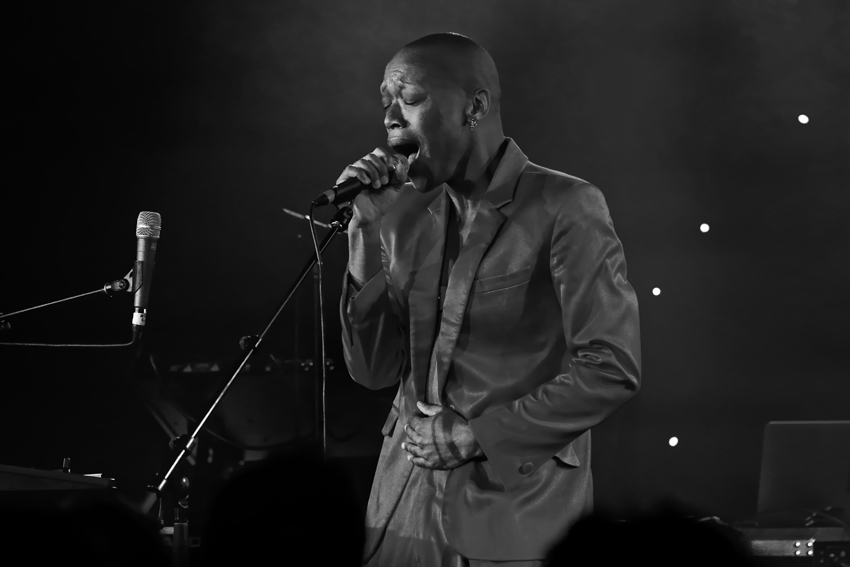