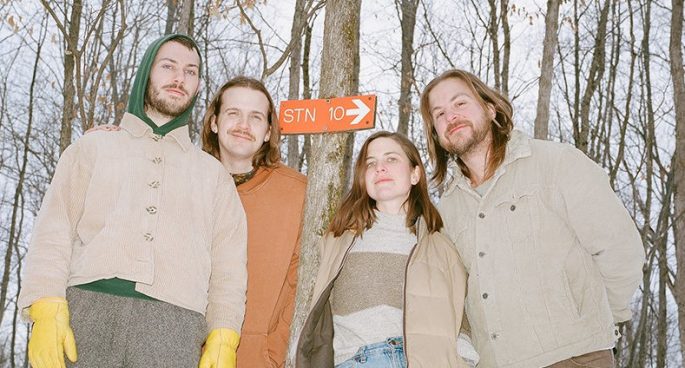 Image by: Will Cox

Little Kid’s Kenny Boothby grew up in a strict Pentecostal home in rural Canada before moving away to Toronto to start making music. From what we can tell from his stunning album Transfiguration Highway, however, it appears that his Christian upbringing has never really left him. Armed with his guitar and a fragile voice similar to Big Thief’s Adrianne Lenker, Boothby’s lyrics redeploy images and metaphors from the Bible to tell secular stories about love and loss in Canada. Take the opening track “I Thought That You’d Been Raputured”, a Bob Dylan homage/spoof that sees the a cheated-upon husband assume the clothes on bedroom floor means his wife has been rapturered; or “Thief on the Cross”, where Boothby twists the crucifixion story to settle scores with old bandmates: “I played in / That old three piece / I opened for thee / Oh, way back in 2015”. This melding of old langugage to tell new stories has a hallucinatory effect upon the listener, recalling Sufjan Stevens’ transcendent Christian rock and John Darnielle’s old world lyrics. His first release on a label, Transfiguration Highway is a confident calling card for a new voice in Canadian indie rock.

Recorded back in 1974-5, Neil Young originally left Homegrown in the can in favour of releasing the darker and weirder Tonight’s the Night. In a Rolling Stone interview at the time, Young said that he felt the record was too personal to be shared with the public: inspired by his split with actress Carrie Snodgress, Young felt the record was “a little too real” and embarrassing. Songs from Homegrown would find their way onto other studio and live albums from Young, but it’s only now that we finally get to hear the whole thing – and it’s only a songwriter like Neil Young who could think this album wasn’t good enough. Featuring the drums and guitar of The Band’s Levon Helm and Robbie Robertson, as well as the beautiful harmonies of Emmylou Harris, Homegrown situates itself, alongside After the Gold Rush and Harvest, as a significant record from a songwriter at his peak.