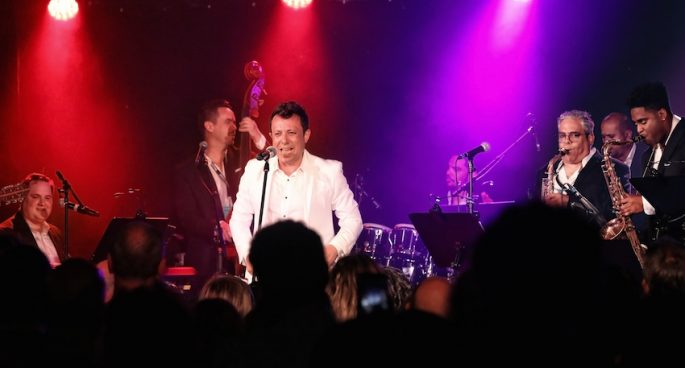 Led by exuberant vocalist José “Pepito” Gómez, the Daptone label’s fiery, Grammy-nominated Latin enemble, Orquesta Akokán has members mostly hailing from Cuba, a number of them seasoned players in groups like Chucho Valdés’ Irakere, Los Van Van and Habana Ensemble. They arrived in Australia for two shows only, luckily both in Sydney, alongside the New York players who make up the band’s critical mass. 12… 13… 14, I don’t know, I kind of lost count, but with most of them sporting smiles throughout, they made impressive oscillations from son cubano through to rhumba look largely effortless despite their complex orchestrations. When midway through tonight’s gig, tres guitarist and Chulo Records founder, Jacob Plasse announced the band’s music was inspired by the casino bandrooms of Havana in a pre-Castro ’50s, he wasn’t joking. For starters, front-man José “Pepito” Gómez (a dead-ringer for Desi Arnaz) is a formidable  showman. Decked out in white threads that made him pop like fluro from the dark-suited band, Gómez conjured a colourful big band era; a time of round-tabled booths fitted with dimmed lamps and telephones, overflowing champagne coupes and dancing till dawn. The group’s original tunes – one of them a homage to the famous Mambo No 5 written by impressive pianist Michael Eckroth – featured utterly swoon-inducing horn arrangements that at times wonderfully teetered towards dissonance. Giving the party atmosphere further lift, were a couple of soaring solos including those by trumpeters Harold Madrigal and Reinaldo “Molote” Melián. Outside afterwards, as Sydney’s heatwave ensured the temperature was still on the right side of 20, collecting every member’s autograph was an exercise in diligence, but thankfully their self-titled LP is a gatefold, so there was plenty of room even to house the fanciest of their calligraphers.