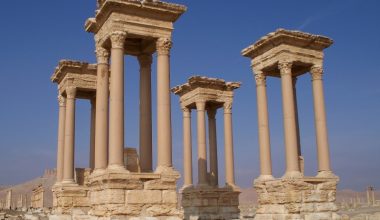 Earlier this week, the Syrian army recaptured Palmyra, the historic Syrian city that was overrun by the Islamic State in May last year.

The release of the ancient city splits ISIS’s front in two and guarantees control of roads (including the one to Iraq), through which jihadists were getting food and ammunition.

At the same time, war has left the ancient city’s heritage ruined with little hope for restoration.

So what does Palmyra’s retake mean as part of the Syrian war?

Sophie Ly called up Bob Bowker, a former Australian ambassador to Jordan, Egypt and Syria and an Adjunct Professor at the ANU Centre for Arab and Islamic Studies to learn more.