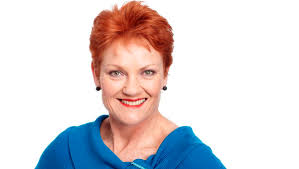 The first of a new series by Loud Noise: “Written in 15 minutes or less…” (because spending more than 15 minutes to write something, is boring)

Pauline Hanson. Long one of the most divisive figures in Australian politics, has managed to rebirth like Lazarus, and much like the alleged rapist in Kings Cross, burst from prison on the front foot to reclaim the status that she once held.

And as she has, the mainstream media has played its role in fuelling her recent ascent, devoting column inch after column inch, TV block after TV block, to covering the random attention grabbing statements that fly out of her mouth as though they were designed precisely for that purpose. To goad an ever hungry media construct into providing what she needs the most. Coverage.

And it has worked, it most definitely has worked, which attests to why I am telling you about her right now. But it is more than that. While the media, and the pundits, and the academics, and anyone else with an opinion, will pine, and opine, and find themselves whipped into a fluster about what she is saying, they are missing the point entirely.

Because Pauline Hanson is not what they make her out to be, in fact, she isn’t even what she thinks she is, or anyone else for that matter.

Now, when you think about the state of the country as it is right now, you could draw your attention to the trivial. The ongoing 18C debates, the who said what about who, and how that makes you feel, debate. You could. You would probably be from an inner-city affluent area, having never ventured out into the suburbs, let alone the proper real-deal boonies, but of course, you could.

You could sit and whine about cultural appropriation, take a stab at the ever-present patriarchy, grunt and groan about men, white people, black people, green, yellow, blue, and goats for all it matters. But then, you would be missing the point.

What purpose does it serve going after those from low-socio economic environments who are looking for someone to blame, and deriding them even further by calling them racists, and bogans and all manner of things, when the real issue, the truest issue, is that which is probably staring you in the face when you look into the mirror.

Now, in Australia, we have a welfare system which is second to none, and the bane of many. In reality, the welfare that we provide those who are the poorest is basically a means of ensuring there is no obvious serf class, no favelas, no reason for armed revolt, as foolish as that may sound. Centrelink is a means of control, of ensuring a docility amongst the downtrodden many. Hence why a third of our budget is afforded to the welfare system.

Yes, Pauline Hanson is political Centrelink. And while both sides of the aisle may not have come up with such an insightful metaphor if I may say so myself, they both know it.

To many, she provides a voice that they feel is being ignored. Long marginalised by those in power, with income equality further and further drifting to be but a distant memory of a time long ago, the voice that she provides is one of the little man, the downtrodden, he – or she – without a seat at the table, let alone an invitation to the building. Unless of course they are cleaning it afterwards.

This is the real problem, we are all so happy to gloss over the conditions that create this environment for our own personal gain, and yet when they do occur, we are all so quick with our buzzwords and denigration of people who don’t agree with us.

So many times, too numerous to count, I have been in situations where throngs of liberati will gather to espouse the same tired bullshit about themselves, the “working” man; to whine about how they can’t afford a house in this environment, how they can’t have, do, or get something, and yet, they are living in the inner city, dress exceptionally well, go to work in fancy organisations, and have, by global standards, what can be described as a well beyond average life.

And these same people, and for the sake of this narrative this is Sydney, have never ventured to Fairfield, or Bankstown, or Lakemba, or Blacktown, or Campbelltown, or Mount Druitt, or any-damn-where, where the struggle isn’t what “I” can’t get, but rather, how can “I” feed my kids today.

This is not limited to Sydney, by all means not, and in particular, in Queensland where Hanson enjoys her widest following, there are admittedly a lot more people of the anglo variety, but for the purposes of this assessment, it matters not.

Because the people she speaks to aren’t just those who are bound by a particular race, rather the ties that bind are those of economic slavery.

While countries like China are investing huge sums of money to build their burgeoning middle class, to drag people out of poverty, here in Australia we have chosen to follow the American lead of getting as much as we can for ourselves, as fast as we can – which in itself isn’t the worst thing – but we have also imported the hypocrisy and judgment that pervades the narrative, which is just outright ludicrous.

We are the reason that a Pauline Hanson thrives. The assumption that anyone who supports her is an idiot, a scumbag, a racist, malingering grub. That we of the intelligentsia are so far removed and above any prejudice. Living in echo chambers, protected by bubbles, and policed by political correctness.

The path this country is trotting down now, has an endgame that is devoid of logic. To advance, to truly advance as a society, fierce and open debate is required.

Debate that isn’t about blocking out any dissent, losing the right to free speech, free thought. But rather, having the best bloody argument and being able to come to a consensus where we all get a little bit of what we want, rather than a privileged few.

Because then, and only then, will the likes of Pauline Hanson, the political Centrelink of the masses, no longer be necessary.