Sculpture by the Sea is Thriving 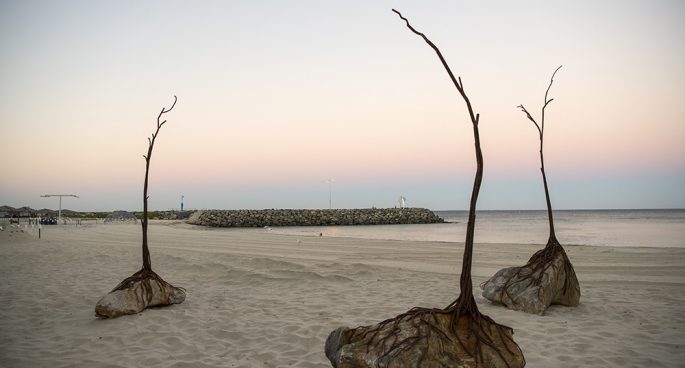 Bondi is home to one of the world’s most iconic beaches, and that golden sand isn’t anything to scoff at. The sun-kissed shores of eastern Sydney are also filled to the brim with bustling bars, exciting eateries and once again, sculpture, more sculpture and a bit more sculpture. That’s right; it’s time for the largest free to public sculpture exhibition in the world, Sculpture by the Sea. You can experience the 22nd annual exhibition in all its ephemeral glory from the 18th of October to the 4th of November, along the serene coastal walk between Tamarama and Bondi Beach. 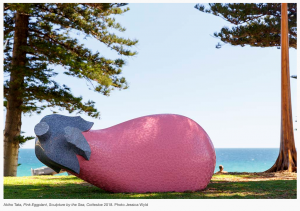 The founding director David Handley had this to say about the birth of Sculpture by the Sea in 1996: “The concept… was the culmination of many years thinking, where a new step in the thought process came up every year or so. Essentially the exhibition came from my wish to create a major free to the public arts event for Sydney.”

The spectacular 2km walk will be transformed into an exciting sculpture park featuring 100 sculptures made by contemporary artists from all over the world. This year’s exhibition will also feature returning Western Australian artist Johannes Pannekoek, who’s ‘change ahead’ sculpture won the 2016 Aqualand Sculpture Award and is now a permanent fixture of the Sydney Harbour Federation Trust. His sculpture along with previous winners, have transcended the transient and can now be enjoyed by Sydney for years to come.

The walk has various walking routes for varying levels of difficulty. So if you want to challenge your inner Bear Grills or you just want to soak in some of that spring-time sunshine, there’s something to suit everyone’s level of fitness. 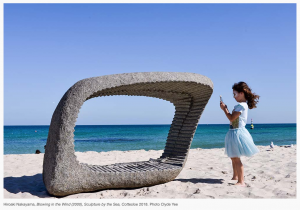 It IS going to be busy though, especially at the start. Sculpture by the Sea does expect around 500,000 visitors to the attend the exhibition this year, so plan ahead and allow plenty of extra travel time to make the most of your day at the exhibition. Traffic will be heavy and there may be some significant delays on the surrounding roads so leave the car at home and hop on public transport. Trains run regularly to Bondi Junction Station and there will be extra buses running from Bondi Junction to Bondi Beach and Tamarama. If you’re an early bird watch out though, because those buses might be chock-a-block full, so either allow plenty of extra time or if you want to hoof it from Bondi Junction to Bondi Beach it’s around 3km. If you want to dodge as much human traffic as possible, then I would recommend coming earlier in the week and avoiding weekends at all costs.

No doubt David Handley has succeeded in his aspirational dream as Sculpture by the Sea has become the largest free public exhibition of sculpture in the world. It now boasts sister events in Cottesloe, Western Australia and Aarhus, Denmark. Check their website below for more information on getting there on the day and plan your trip accordingly if you want to soak up some culture, sculpture and sun!