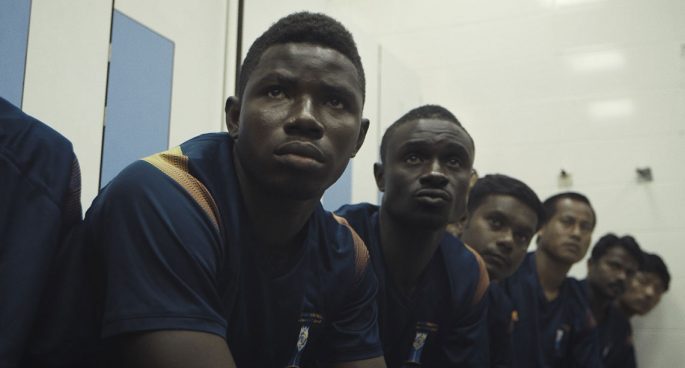 With plenty attention on Qatar with the World Cup and more broadly in the political world, it’s more than a suitable time to direct our attention to the country and its workers. This film looks at the workers from around Asia, the Middle East and Africa who have descended on Qatar to build the stadia for the World Cup. This documentary tells what it’s like to work there. Once the euphoria of infamously winning to host the competition was over it was down to the actual work of stadia construction.

The novel twist in this documentary is its focus on an amateur football tournament that is organised for the construction workers. Particular focus is on on one worker who is an aspiring professional player.

In between dealing with the fortunes on the field they have to deal with the actual work. A plight that they hide from their family and friends from their home countries. Living in basic conditions,  work is hard, and life is lonely. They miss family who are back home and the tournament is a welcome respite and distraction.

Not all the workers are in construction. There are engineers, designers and other office workers. It’s an eclectic bunch of characters, as conversation during meal time revolves talking about what is freedom and modern slavery. They buck expectations in that they don’t talk of topics such as emancipation and modern slavery; these are thoughtful people.

The class divisions shown are stark. There are the company owners, the people who get to go to the malls and then there are the workers. Any sort of social life is highly restricted. Accommodation isn’t much better than a basic camp. With no transport or other facilities. Some men crack and become violent. The tournament means a lot to them and there’s some skill shown on the field.

This is a great, thoroughly interesting story rarely told. The tournament’s pressures brings out feelings that are just below the surface of the workers and a rousing speech articulates what they are all feeling. The pre and after game speeches are mostly uninspiring, but this last speech that evokes the class divisions between the people is especially poignant and is worth the price of admission alone.