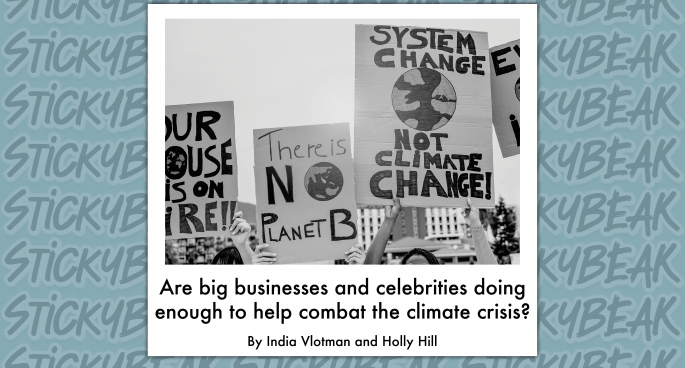 Soggy straws, reusable cups, carpooling. Small sacrifices most of us make to do our bit for the environment. But, what difference does it really make when celebrities and major companies aren’t pulling their weight?

Kylie Jenner, Jay-Z and even Steven Spielberg are some of the biggest climate criminals, polluting thousands of tonnes of CO2 emissions into the atmosphere. But, it’s Taylor Swift who takes the cake as the biggest culprit. She’s caused quite the stir with recent revelations of her excessive private jet use.

We hit the streets and asked the public their thoughts. Most people were horrified to hear the stats.

Twitter account @celebjets tracks private jet trip length and CO2 emission output. All this sticky-beaking makes you wonder where responsibility ultimately lies when it comes to tackling the climate crisis?

We talk to Emiliio Roberts from non-profit REVERB about how they are encouraging musicians to reduce their carbon footprint when putting on live gigs. He provides insight into the efforts taken on Billie Eilish’s Happier Than Ever World Tour that made its events carbon positive.

Before delving into the issue of big oil with Dr Jonathan Symon’s of the Macquarie School of Social Science. He sheds some light on how large oil companies have created an agenda which focuses the blame back onto you, the individual consumer, rather than address the root of the problem they have exacerbated.