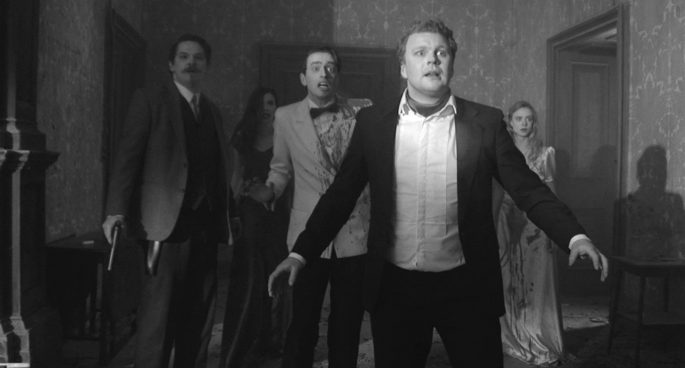 Some classic horror movie tropes are given the once over in this horror spoof from first time director Jack McHenry. He scrapes his pennies together to produce this black and white horror satire that will have you second guessing anyone who has the bright idea of hosting a séance.

Set in the 1930’s, a group of people make their way to a dilapidated old estate to catch up with a friend who in a fit of interest in contacting the dead, bought the estate thinking what could possibly go wrong?

Feeling much like a student film there is charm to be had for fans of horrors films before the 1970’s.

The micro budget only allowed special effects that could have been done on a phone. Yet the cast do their best to camp it up with Margaret Clunie standing out as Christine.

Full of gross out comedy, a few jump scares and a gate to hell, the film references a Hammer film or two while not quite having the classic appeal of that infamous production house.

Best watched late at night at a particularly successful party of people who are willing to laugh. A schlocky horror of a film.