The Shadows of Men by Abir Mukherjee Part One 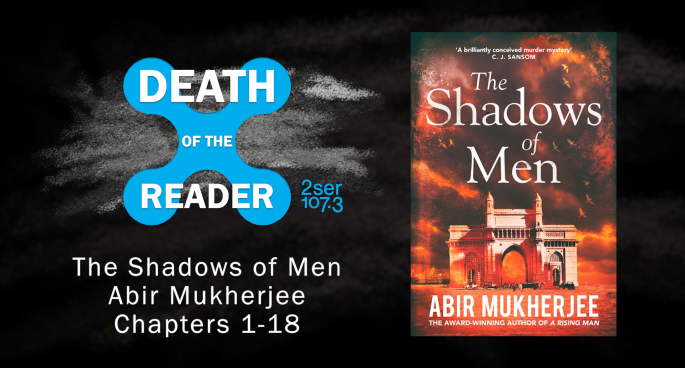 We discuss chapters 1-18 of Abir Mukherjee’s latest thriller, The Shadows of Men. Taking a step away from our normal fair-play pastures, The Shadows of Men plants us in 1923 Calcutta, where Sergeant Surendrenath ‘Surrender-Not’ Banerjee has found himself arrested over the murder and attempted arson of Hindu thought leader Prashant Mukherjee. Captain Sam Wyndham bails him out of jail, but then the Sergeant’s only alibi, Lord Commissioner Taggart, is felled by a makeshift explosive. Suren goes on the run, fearing Taggart’s stay in hospital might conclude with his hanging if he can’t find the true culprit. Riots claim the city, and common sense is a distant memory.
We also discuss a few options for wider reading in India’s flourishing field of crime fiction. Our recommendations include Abir’s ‘Smoke and Ashes‘, Ajay Chowdhury’s upcoming ‘The Cook‘, Salil Desai’s ‘3 and a Half Murders‘, Soumon Chaterjee’s ‘The Calcutta Conundrum‘, Sujata Massey’s ‘The Widows of Malabar Hill/A Murder at Malabar Hill‘, Kishwar Desai’s ‘Witness the Night‘, and Ankush Saikia’s ‘More Bodies Will Fall‘.
Check out Part Two and Part Three here!

The Shadows of Men by Abir Mukherjee Part One