The Skywriting of the Radio Feature 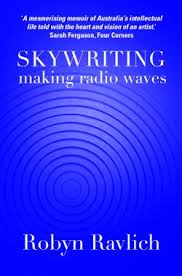 Since its invention as a broadcast media, radio has functioned to intimately bring into people’s living rooms the experiences of people from different places and spaces. Working within this medium for several decades Robyn Ravlich has produced radio features at the ABC utilising evocative narratives that draw on the unique qualities of the aural medium. The winner of a range of international radio awards, Robyn recently chronicled her brilliant career in her memoir “Skywriting: Making Radio Waves,” which details her practice of launching stories into the ether.

Stephen Hill talked to Robyn about the importance of the radio feature, talking about her New York Radio Prize winning documentary “Robert Manne’s Voice” and what is was like retracing the footsteps of Woody Guthrie and the experience of interviewing East Timor’s first president Xanana Gusmao.

The Skywriting of the Radio Feature