Australia’s Recovery from the Ongoing Effects of Climate Change

As society continues to feel the wrath of the global pandemic COVID-19, which has shaken the world both economically and socially, Australia was still dealing with the fallout of two disastrous events before COVID-19 even begun. Ultimately due to climate change, the nation had to survive economically and environmentally the worst drought & fire season to date.

In July 2019, a climatologist at the Australian Bureau of Meteorology stated that the Australian drought that had been on-going since 2017, was officially the worst on record and “had exceeded the Federation Drought, the WWII drought and the Millennium drought in terms of its severity” . This prolonged drought then seemed to lead to the most devastating bushfire season to date that became colloquially known as the ‘Black Summer’. In the few short months Australia saw the death of 34 people, more than 12.6 million hectares of land across Australia burned, 434 million tonnes of carbon dioxide emitted into the atmosphere and over 1 billion animals wiped out. 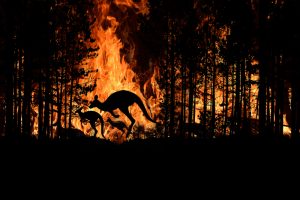 Yet this disastrous environmental fiasco, did see the positive attributes of humanity as individuals, charities, celebrities, and government systems, worldwide came together to assist with the devastating impacts by together actively raising billions of dollars. An example of charity that has successfully raised funds was WWF that had raised 30 million AUD to support efforts in restoring habitats for animals like koalas and the prevention of deforestation in the future. Along with It becoming an international trend to #prayforAustralia on all social media platforms.

While the Australian government has further invested $2 billion as a bushfire recovery fund, on top of $100m that has already been spent providing help. As the Australian treasurer Josh Frydenberg stated these funds will be used to “restock, rebuild roads and telecoms infrastructure, for mental health support, attracting tourists back to the regions and helping to restore the local environment and impacted wildlife”.

As for the flora and fauna devastated in the fires and droughts, rehabilitation and recovery efforts will be ongoing for decades and its effects will be felt for generations to come. It sheds to light the detrimental impact climate change is having on our planet and our own wellbeing. Noted by Lesley Hughes a climate scientist from Macquarie University who stated that, “climate change has been a being a stress multiplier for many years, It’s absolutely been foreseen that our climate is becoming more variable and more severe” . Reinstating the need for the world to act now and stop climate change to save both humanity and the planet.

DATE POSTED
Monday 25th of May, 2020
PRODUCED BY
CATEGORY
TAGS
SHARE
SUPPORT US