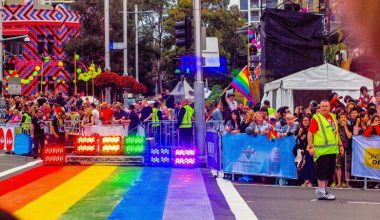 In 1978, hundreds of protesters took to the streets of Sydney to support a global movement to decriminalise homosexual acts and end discrimination of members of the LGBT community. However, the protest went wrong when the police intervened, and many of the protesters were attacked and jailed for participating. This march became the genesis of the Mardi Gras celebration the following year.

This week, MP for Coogee, Bruce Notley-Smith is reportedly filing for a motion to get the NSW parliament to officially apologise to the first protesters and Mardi Gras supporters, nicknamed the 78’ers, for the unjustified police brutality they suffered.

Minister Notley-Smith joined to discuss with us why he filed the motion and how the march affected him. He was followed by Steve Warren, who was one of the people who was at the 1978 march, and joined Sam to discuss the apology and how the Mardi Gras celebration has changed since 1978.