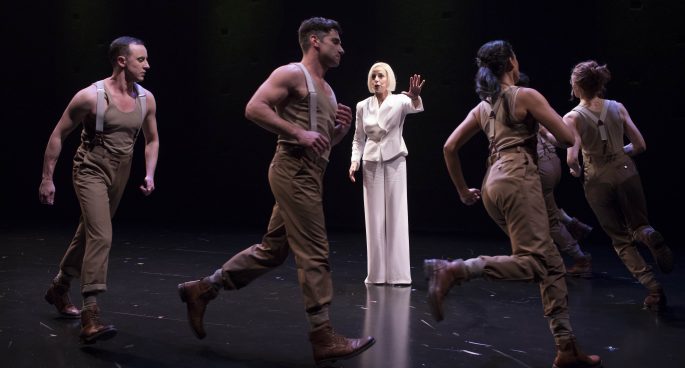 An astounding production dealing with the very emotional story of changing gender and what it means to live an authentic life. Based on interviews this production takes us through Catherine’s life to explore the issues she has had to deal with as she made her way as a public figure from male to female. It’s personal, raw and very funny.
And what a cast!

Based on interviews with Catherine McGregor

Still Point Turning: The Catherine McGregor Story opens at Wharf 1 Theatre this April. Directed by Priscilla Jackman in her Sydney Theatre Company debut, Heather Mitchell will play Catherine in this vivid theatrical portrayal of one of Australia’s most intriguing public figures, with a cast which also includes Nicholas Brown as Rahul Dravid, Andrew Guy as Young Malcolm, Chantelle Jamieson as Dr Amar, Ashley Lyons as Malcolm and Georgina Symes as Ayla Holdom.

From the age of eight, Catherine knew she was a woman. But first she would have to live as a man. She played many parts – son, brother, husband, athlete, soldier, speechwriter – working in professions full of machismo and inside institutions built by men. Every day was a challenge which took its toll. In 2012, aged 56, McGregor faced a turning point – to end her own life or to begin living authentically by transitioning to life as a transgender woman.

“99% of the words spoken on stage in this play are Catherine’s,” Director Priscilla Jackman explains. “She has trusted me, our team and STC as a company, to present, manage and give life to her story in a way that is full of integrity. Catherine lived the life, she shared with me her extraordinary experiences and her words, giving me the opportunity to craft a new theatrical work from them, but she hasn’t at any stage stepped in to manipulate or reshape the outcome. As Catherine puts it cricket – not theatre – is her game.”

Still Point Turning: The Catherine McGregor Story is a fascinating journey – covering the military, cricket and politics as well as the story of Catherine’s transition.

“It’s very humbling to have this amount of interest in my life – I still haven’t processed it properly,” she said. “It’s been a joy working with Priscilla. She’s treated me with great respect and sensitivity, which has been very moving. It’s an incredible honour to have my story told on stage and I’m really touched by the passion that has gone into this project.”

The role of Catherine will be played by three actors – trans actor Andrew Guy who plays Young Malcolm, Ashely Lyons who plays Cate prior to transition, and Heather Mitchell – who plays Cate of the present day.

Catherine hopes that the play will help humanise the experience of trans people and bring that to a wider audience. “I hope if nothing else, sceptics who see the play will be privy to the suffering that’s part of the process of making the decision to transition genders. If it actually gives people pause to think that’s it’s not a frivolous exercise, that we’re not freaks, we’re actually people who have suffered in our raw humanity before making this decision, I think we will have achieved something.” You Better Work, Bitch! ~ Working Bitches at All About Women