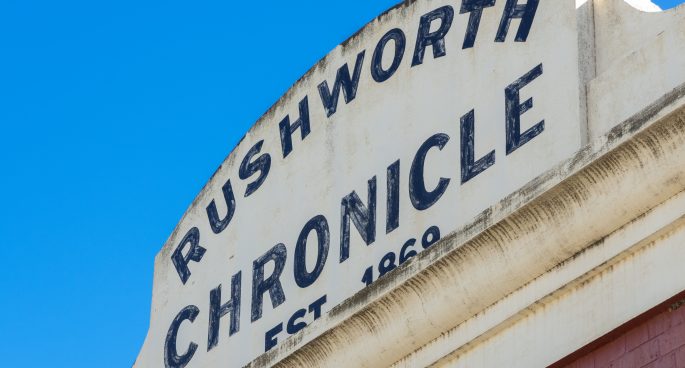 The news is a critical part of many a person’s day. Whether it be read off the pages of a newspaper or listened to on the radio. However, it cannot be denied that the method of which the news is delivered has undergone some vast changes over the past decade here in Australia.

As the news landscape becomes more and more personalised, with apps like Facebook, Twitter, and other such methods for keeping one updated about the world’s state, it is no surprise that the industry is going through some harsh changes. With the advent of digital news sources, local news suppliers are on the decline. Daniel Butler points out that, “local new is a lifeline to the health and stability of any regional community, but now more than ever, those outlets are under threat”. While it is more convenient for people to get their news from social media in this contemporary age, it is not necessarily fact checked like more traditional news sources may be, which can lead to false conceptions being sown in the community. After what is estimated to be “a hundred and twenty-odd years”, the established news delivery system is breaking down.

Peter Fray, the managing editor of Crikey News, has noted that especially in the past two decades, there has been a decline of the traditional news model. In addition to the lowering interest in newspapers, there has been a lack of attention given to advertising. In the more halcyon days of newspapers and regional news, placing an advertisement in the paper would “guarantee a lot of interest and attention”. However, such advertisements are going increasingly unnoticed as the sales and attention towards newspapers dwindles.

In addition to the problems already plaguing regional news sources, the COVID-19 pandemic has brought across even more hardship. With quarantine in progress, much fewer people are going out and about to purchase newspapers to read, preferring to spend their time at home and receiving the news through digital sources rather than risk going outside. Newspaper outlets, especially those that relied on weekly publications to stay relevant and afloat, have been closing by the dozens. Those outlets that have managed to survive the pandemic have begun to make the jump to a more digital state. Queensland is one of the most affected states by this process, with about “22 regional and 20 community publications going to digital only”. There is simply not enough demand for physical newspapers anymore with the COVID-19 pandemic about.

What this decline in local and regional news could mean is that, much like in the United States, it could create something called a “news desert”. What a news desert is, is an area or province that is untouched by any news whatsoever, which would deprive the people living there of any updates on current events. There were at least sixteen areas across Australia that were categorised as news deserts prior to the onslaught of the pandemic, and that number stands to increase with the closure of more and more news supplier outlets. The Australian government understands the hazards that this could pose, and has issued over “50 million dollars worth of grants” to regional news outlets, to prevent too many from closing and creating news deserts. However, experts and people in the industry such as Carol Burns, thinks that it is not enough, and that a total overhaul of the news system is called for in order to stem the haemorrhage of regional and local news sources.

What this could mean in the future is that in more rural and distant areas in Australia, more government funding would be sent to bail out newspaper printers and publishers, as dozens of them are in dire need of financial bolstering. It isn’t only for a stopgap measure against news deserts, but also to keep families that run theses news outlets in the green and prevent unemployment. But in the long run, it may seem inevitable that physical newspapers give way to their more convenient, digital counterparts. Many of Australia’s youth have already made the transition, and as the country becomes more and more advanced, it seems only natural that newspaper outlets change to being more digital in the method of which they choose to broadcast their findings and information. Another unknown variant is the impact of COVID-19 on the newspaper industry. The sooner the pandemic is dealt with, the fewer casualties in the news industry there will be. Given all these factors affecting regional and local news, there seems to be a storm looming on the horizon, one which will radically and inexorably change the way that Australians give and receive news for generations to come.

Click here to listen to the full episode of Think: Digital Futures ‘All Quiet on the Regional Front’.