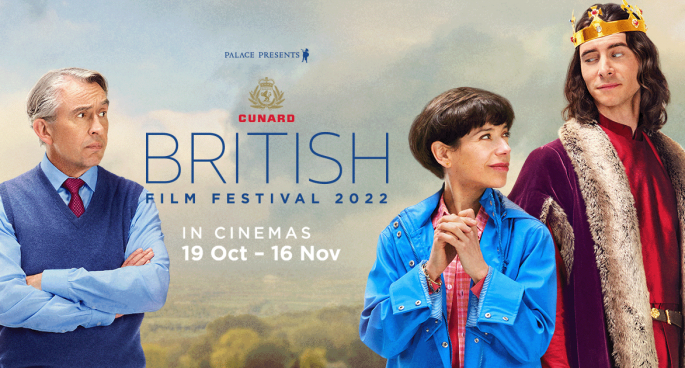 Whether you’re mourning the monarchy or simply looking to catch some quality English cinema, the Cunard British Film Festival has something for everyone. From off kilter comedies, tender dramas, classic action blockbusters, and touching true stories, nothing is off the cards. Join Felix Shannon of Tuesday Drive as he speaks to festival director Kim Petalas about this year’s lineup, performances audiences should look out for, the death of the queen, and the appeal of British comedies.

Presented by Palace Cinemas, the British Film Festival returns this year for its 10th Anniversary! Running from the 19th of October to the 16th of November, the festival ‘celebrates the finest filmmakers and acting talent British cinema has to offer’, featuring some of the year’s most highly anticipated films.

With the likes of Boiling Point, Nowhere Special, Belfast, and The Duke in last year’s program (which had been delivered under some exceptional circumstances), there was a lot to live up to this year! Officially released on the 29th of September, the 2022 program exceeded these expectations, featuring twenty Australian premieres and thirty-seven films in total! Some standouts include Martin McDonagh’s newest film The Banshees of Inisherin (which received its premiere in Venice), Sam Mendes’ love letter to cinema Empire of Light, and light-hearted period drama Mrs. Harris Goes to Paris from director Anthony Fabian. Discover the full program here.