Hailing from north-east Mali, where the scorching sands of the southern Saharan desert engulf the bordering lands of Niger to the east and the lowest points of Algeria to the north, the nomadic musical collective known as Tinariwen are the Grammy-winning architects of a unique style of desert-blues. Their enigmatic history interweaves with stories of teenage revolt, armed resistance and kidnappings, through to clandestine celebrations of song and dust-bowl festivals. From homeland drought to worldwide acclaim, their endless touring and international flight itinerary, is mirrored by cross-border flights alongside refugees who also identify as Tuareg, a confederation of people whose families stretch beyond the aforementioned lands to Libya and Burkina Faso.

Rising above it all is their music.

It’s both mournful and joyous, built on the roots of rebellious rock’n’roll and propulsive blues. Add West-African percussion, liberal handclapping and lyrics sung mainly in Tamasheq – elsewhere Arabic – and the result is utterly hypnotic.

Founding member and lead vocalist/guitarist Ibrahim Ag Alhabib can trace the group’s genesis back to the late ’70s. That’s when he was introduced to the protest music of Morocco, post-independence Algerian pop, and whatever he could get his hands on from the west’s recording cannon, whether Jimi Hendrix, Elvis Presley or Dire Straits.

Still, it’s a little surprising, when via an interpreter, one of the youngest members of Tinariwen, bassist Eyadou Ag Leche reveals: “We love Fat Freddy’s Drop!”

I’ve asked him what some of his favourite albums are at the moment, hoping to score a few tips on other Saharan bands I should check out. I wasn’t quite expecting to have Kiwi dub-soul outfit Fat Freddy’s common to both our collections.

“From Assouf music style, you have to listen to Imarhan!” Eyadou Ag Leche enthuses. Last year, I tell him, fellow Tuareg musician Mdou Moctar played in Sydney. It was a fantastic show, albeit cut a little unceremoniously short by an over enthusiastic local stage manager.  Apparently the audience for the late night Sydney Festival cabaret show that was to follow, needed to be ushered in pronto.

Have Tinariwen met Mdou Moctar or worked with him?

“We have not met Mdou on tour yet, but for sure we would love to!”

That’s one clue as to just how vast their homeland area is and how much time Tinariwen spend on the road.

“Both experiences were rich regarding the different meetings we had…” the bassist recalls. “The most special one was in the Mojave Desert around Joshua Tree, because of the new environment but also it was very exciting to be where some legendary American bands love to be!

Album guests on Elwan include Kurt Vile, Mark Lanegan (Screaming Trees) and Alain Johannes (Eleven, Queens of the Stone Age, PJ Harvey/The Desert Sessions). Eyadou Ag Leche is happy to explain some of the internal writing process: “For each new release, we are always going into the unknown. The writers from Tinariwen have a lot of old songs but and the principal [way we] work… is to get the best ambience to relate the authenticity of [each song’s] story, simply.” 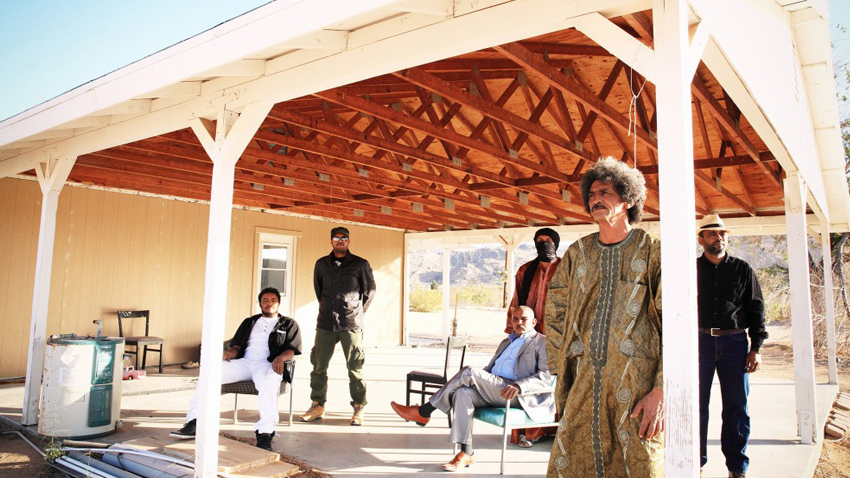 “Until now almost systematically, a lead [songwriter] will come with his song and all the members [work on] arrangements. But for Elwan we had some great moments with new ways of recording, as with some other dubs, we felt great liberty! More recently, some songs were written by [myself], a younger generation bass player in the band for 15 years. My lyrics are often a request to my people about the situation in Mali – and especially in the Azawad region. Our lyrics are often about our situation in the Sahara area, but for sure they… have some correspondence with some other cultures, everywhere in the world.”

PP: Often articles and reviews in the west, talk about the music of Tinariwen being a distinct type of ‘blues’, for which their own reference point is American Blues music. But many members of Tinariwen had never heard American Blues records before you began traveling outside of Africa, right?

EAL: Our musical style, “Assouf” is directly coming from our traditional music. 40 years ago, Ibrahim found a guitar and brought her with him… in [to] the desert. He began to play with all he had listened [to] until then. [It was] a traditional music and poetry game. It was an old dream he has realised [which] he had when he was four years old: a movie with a guitar player that Ibrahim was in complete admiration of. 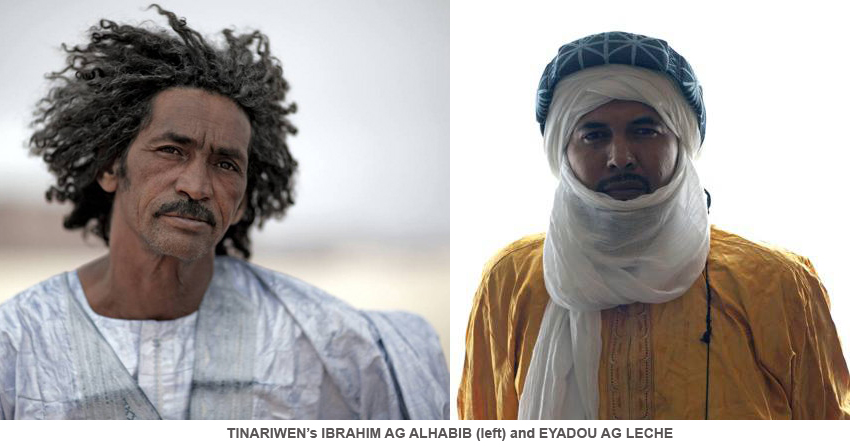 PP: The band tours so much and so extensively. Besides friends or family, what do you miss the most about home when you find yourself in a city far away from the Sahara?

EAL: Always after a few weeks around the world we have “Assouf“, the nostalgia to see our gardens!

PP: Your music is associated with “rebellion”. What’s the most pressing issue you for you at the moment?

EAL: Our dream could be only to find a good way to be all together. Maybe less power for money and it’s consequences everywhere around the world.

I tell Eyadou Ag Leche that the song Ténéré Tàqqàl from the latest album, sounds very sombre to me, but since I don’t understand the words, I’m not sure if I’ve misinterpreted the mood of the song. Asking whether it’s a kind of lament for the desert he calls home, the bassist simply provides a copy of the self-explanatory lyrics:

The Ténéré has become an upland of thorns / Where elephants fight each other /Crushing tender grass under foot.
The gazelles have found refuge high in the mountains / The birds no longer return to their nests at night / The camps have all fled.
You can read the bitterness on the faces of the innocents / During this difficult and bruising time / In which all solidarity has gone.
The strongest impose their will / And leave the weakest behind / Many have died battling for twisted ends.
And joy has abandoned us / Exhausted by all this duplicity.