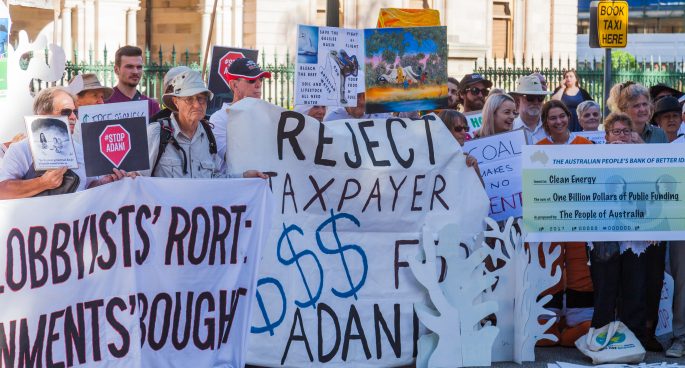 For months, the ABC’s Four Corners program has been digging into the business practices of the Adani Group – the company planning to build Australia’s biggest mine site in Queensland’s Galilee Basin.

Last night, Four Corners detailed Adani’s network of offshore companies and trusts with a stake in Queensland’s proposed Carmichael mine project.  Adani has promised that the Australian Government would receive $22 billion in tax and royalty payments over the life of the Carmichael mine, however there are concerns that these payments could be avoided in offshore tax havens.

Adani’s poor environmental record was also laid bare, with events like coal spillages and illegal dredging practices detailed in the program. Environmentalists in Australia are especially concerned that the Great Artesian Basin and the Great Barrier Reef will be ecologically devastated by an unprecedented escalation in mining and shipping.

Finally, claims that the Carmichael mine will employ over 10000 people were found to be grossly over-exaggerated. The proposed mining development would employ a figure closer to 1500, a modest sum when compared to the 70 000 Queenslanders employed in the State’s tourism industry.

Nic was joined by Producer Jack Schmidt to discuss the program’s findings and question the uncertain future of this controversial project.