Spiky Victorian Post Punkers Pinch Points are back with ‘Process’, a turbo charged lineup of 10 tracks.

Tackling the wrath of vexations Australians have had been confronted with over the past few years, from the bush fires to first nations incarcerations.

At the Audrey Studios in March 2021 the group recorded their third studio release with Anna Laverty (Courtney Barnett, Nick Cave, The Peep Tempel). Anna mixed and co-produced the album, and it was mastered by Joe Carra (King Gizzard, Courtney Barnett). 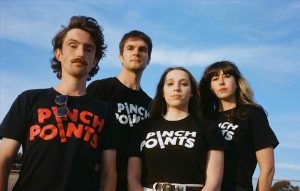 Lead singer and bass player Acacia Coates serves up uniquely Australian punk vocals that carry a similar authenticity to fellow Melbournian punk rockers Amyl and the Sniffers. Coates’ urgent vocals in the album are burnished with the driving guitars of Adam Smith and Jordan Oakley, all fusing together to spawn a true sense of anxiety and restlessness.

Gendered violence is confronted in Haruspex, a single the band released on International Women’s Day :

“We are frustrated by the long-enduring issues of gendered violence towards women, trans and gender diverse communities….usually at the hands of men. We’re sick of seeing the same headlines, the same apologia for ‘promising young men’, the same lack of empathy from our elected leaders.” (Lead singer Acacia Coates)

Pinch Points hold absolutely nothing back in ‘process’, with uniquely Australian vocal deliveries and chugging angular guitar lines, and on ‘Process’ continue to prove their relevance and uncompromising take on politically charged punk. They aren’t slowing down any time soon.

Out now on vinyl and Digital via Mistletone

Next
The Laurels – Homecoming