Andy Golledge, Strength of a Queen

A long time favourite on the Sydney alt-country scene, Andy Golledge‘s Strength of a Queen brings the various strands of his sound into the one place in a colourful and lively first album.

Golledge is an artist that (along with the band) one could readily describe as a lifer, having been playing shows in the Inner West for the better part of 15 years prior to this debut. He already had a reputation for delivering live shows that are known for energy and drawing a local cult-like following (and the album is loaded with references to Sydney locations). In fact, many of the songs contained on Strength of a Queen and are finally finding a proper recording here after evolving as staples of the live show over many years.  His musical partnership with singer/songwriter Caitlin Harnett (of Caitlin Harnett and The Pony Boys, a former 2SER Feature Artist) further honed and developed the groups sound as their following has grown. 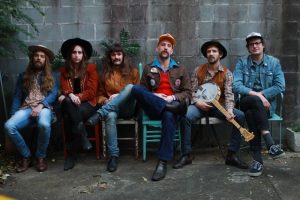 Despite growing up in Tamworth and a love of country music in it’s various forms, it took an extended road trip across the USA to fully grasp it’s cultural roots:

““In Australia it’s a persona or a performance, there it’s a way of life. There’s an element of
danger that I learned over there that I’ve put in our music.”

And there is a travel diary aspect to be found on many songs on the album, such as Dreamin’ of a highway and Ghost of Life. Lead single New Stamp gave a more rollicking introduction to Golledge’s particular direction in Australiana. The followup Love like this hinted at a more tender direction, and the album lands with a variety of emotions on offer across it’s eleven tracks.

Filled with a cinematic openness and a fixation on scenery, it is nevertheless underpinned with a human sense of melancholy and confronting loss, with music as catharsis to that. Played with sincerity and rawness, this is a fine homegrown debut and out now via I Oh You on Vinyl and Digital.