2SER Subscribers can enter the draw to win a vinyl copy of ‘Boy’ by emailing win@2ser.com with ‘Harvey’ as the subject line. 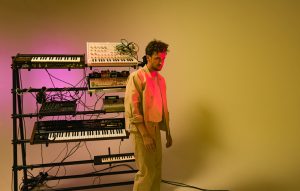 Recorded between London, Los Angeles and Harvey’s own Swimming Pool Studio, Boy swings the door open, plants you in the front passenger seat and transports you to the future of funk. The album paints a perfected hypermodern envisioning of where the genre is headed, it’s a realm defined by seamless fusions. From the luscious in the pocket grooves of New York boogie, the snaps of 80’s coldwave, the enchanting hyper-produced studio pop of Todd Rundgren to the driving and true elements of dance music; Boy is the embodiment of a veteran electronic music master.

Sutherland (a.k.a Mike Katz) has been a prominent figure of Australia’s electronic funk music scene since his 2013 Nexus tape. Alas, this is his debut full length album and according to Sutherland, Boy is the product of countless nights of obsessive overthinking, perfectionism, psychoanalysis and the birth of his ‘neurotic funk’ theory.

“I made most of this record in a circular loop between my studio and my psychotherapist – one informing the other, a slow grind toward some kind of Eureka moment, some realisation of self. It’s skeletal, angular, finished only when our time runs out. It is beyond the platonic ideal of Funk, as it is devoid of the necessary Looseness due to the neurotic overanalysis involved, however I feel comfortable in defining it as Neurotic Funk.” – Harvey Sutherland

Sutherland proves he is the master of synthesisers in tracks like “Jouissance”, creating a whirling flurry of synths and driving beats to provoke a delectably groove track that undoubtedly fills the brain with an influx of serotonin. “Type A” proves the diverse talents of Sutherland’s musical prowess delivering a taut coldwave album standout groove track, propelled by the help of Melbourne’s own Jack Summers of the post punk outfit CLAMM.

Across the board, Harvey Sutherland brings an impressive and visionary funk album, proving that his theory of “neurotic funk” is undoubtedly a work of wonder.

Out now via Clarity Recordings and Virgin Music Australia.

2SER Subscriber can enter the draw to win a vinyl copy of ‘Boy’ by emailing win@2ser.com with ‘Harvey’ as the subject line.

Next
Dorsal Fins – Star of the Show