The psychedelic, indie rock, multi-instrumentalist and self pronounced “Philly’s Constant Hitmaker” Kurt Vile has released his much anticipated 9th album but first with the major label Verve Records, (watch my moves).

Splitting the recording process between Vile’s own self built Philly home studio OKCentral, and his longtime collaborator Rob Schnapf’s (Elliot Smith, Beck, The Vines) iconic LA studio Mant Sounds. (watch my moves) takes Vile’s quintessentially epiphanic lyrical stylings in a vibrant yet meditative direction. Leading you on an expedition across the landscapes of your imagination. 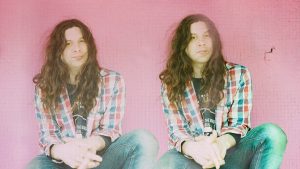 On writing this album, Vile found himself in a place of deep solace as a result of remaining static after a decade of tours and chaotic recording schedules. All of course, at the hands of the pandemic. However in this period of stagnation, a ritual was born. In his Philadelphia home, the morning air was filled with the cosmic sounds of Sun Ra and Vile, poised at his window seeking to catch the glimmers of sunlight dripping through the forest trees.

“In that moment, it’s all the travelling I’ll ever need. This record encapsulates all that—letting two years roll by and staying in my zone, travelling all the while in my brain, at the piano or in my guitar.” (Kurt Vile)

This metaphysical exploration is the thread to which (watch my moves) shifts along. The album’s name was birthed from the whimsically introspective A side track Mount Airy Hill (Way Gone). Where Vile masterfully weaves his twangy country vocal, effect laden guitars, restrained synths and a clean driving bass to invite you to stand atop the summit together, and ponder.

“It’s about songwriting. It’s about lyrics. It’s about being the master of all domains in the music,” (Kurt Vile)

Track to track Kurt Vile’s ability to lyrically freeze a moment on (watch my moves) is unmatched. The songwriting is only propelled by the thoughtfully fused elements of blues and southern rock with airy instrumentals, distorted guitars and psych-warped synths. Vile once again, proves his dimension bending mastery of his craft in (watch my moves).

Out now on Verve / Virgin on vinyl and digital

2SER has 2 vinyl copies of Kurt Vile – (watch my moves). 2SER subscribers can enter the draw to win  by emailing win@2ser.com with ‘Watch my moves’ as the subject.

Next
SO. Crates – Malcolm After Mecca