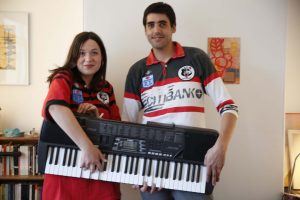 Dropping their self-titled debut LP, Melbourne/Naarm’s Modal Melodies have gifted us a warm blanket of art-pop sounds at just the right time.

The Feature Album all this week on 2SER, this is a masterclass in beautifully enacted electronics and multi-layered harmonies.

Modal Melodies are the duo of Violetta Del Conte-Race (Primo! / The Glass Picture) and Jake Robertson (of Alien Nosejob).

It’s a constantly mesmerising take on 80s inspired aesthetics, drifting between disco and languid ambient soundscapes. Drum machines, keys and effects laden sounds ride at the forefront throughout – creating a wonderfully evocative and arresting listen that swims in a haze of low-fidelity glow and warmth.

Highly Recommended and out now on Vinyl and Digital via Antifade

Previous
Grand Bizarre by Bottled Up

Next
Bobby Oroza – Get on the Otherside