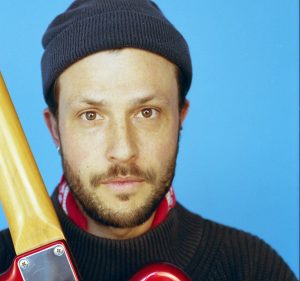 Hop UP is the third album from London-based songwriter and vocalist Orlando Weeks, following on from 2020’s The Quickening.

Having  spent over a decade fronting English indie outfit The Maccabees, prior to their disbandment in 2016, Weeks work has not always been been associated with such easy joy.

Conceived during… (you guessed it), the frequent lockdowns of the last two years, by the artists own words, this project became a cathartic experience, saying  “…the atmosphere of this record played a major part in me maintaining a balanced headspace”.

The result is an affirming excursion into a left-field pop sound that is buoyant and open-hearted, drifting between swirling vocal folk interludes and krautrock influenced experimentations. The dreamlike, tender and sweet vocal delivery is immediately evocative of the avant-garde pop stylings of later Arthur Russell, and there is a similar perfectionism in the harmonies and arrangements at play here (check out the almost Gregorian feel of Make you happy). The backing vocal support from Katy J Pearson among others takes things into blissful and ethereal territory.

Nevertheless, there is an underlying self-awareness and non-seriousness at play here, as well as dynamism and easy movement in the production that takes things far beyond mere balladry. On songs such as Way to go, which begins with a still portrait desctription of a city skyline, before snapping into an almost boogie like groove  for the remainder.  Other significant standouts include Bigger, a missive on newfound love, and Hey You, Hop UP.

Recorded over several extended sessions with Deek recordings head Bullion, the easy and rich instrumentation throughout is top-tier, notably with the work of bassist Ben Reed on key tracks. Best listened to as a complete album from top to tail, this is highly recommended and 2SER’s Feature Album all this week.

Out now on vinyl and digital via Play it again Sam

Next
By The Book, by Partner Look