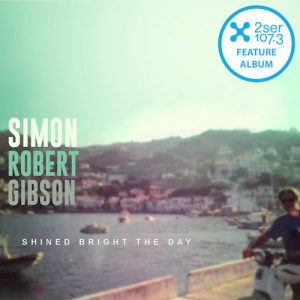 Shined Bright the Day is the Feature Album all this week on 2SER.

Despite an almost 15 year period living in Southeast Asia, Simon Robert Gibson has remained a well known figure in Sydney and Australian music circles as a drummer and founding member of bands such as Disneyfist, Modern Giant, The Coolites, and more recently Aerial Maps (with his brother Adam Gibson). Regular stints also included with  Sneeze, Lazy Susan, and the Simon Holmes-led outfit, Fragile.

While much of the songs here are inspired by overseas adventures, there is as much a sense of returning home. And paying tribute and thanks to musical inspirations is a theme here, such as the multitudes of shout-outs on lead single “Salvation” or the more poignant and personal “Song for Gyn”.

On this, his 2nd solo LP, a combination of inspired indie and folk melodies power this bright and upbeat reflection on the memories that make up one’s life. While the sound is evocative of a hazy beach-side summer day, lyrically it direct and honest, filled with literate songwriting.

Underlining this are the joys and wisdom of enjoying brief moments of freedom, and having the clarity to experience them for what they are.

Out now via Bandcamp: https://simonrobertgibson.bandcamp.com/album/shined-bright-the-day