SO. Crates – Malcolm After Mecca

Busting out from the hearts of Australia’s hip hop/neo-soul duo, SO. Crates have delivered their mind bending debut full-length double L.P. Malcom After Mecca via Bedroom Suck Records.

Crates was born from the genius of Melbourne based Producer Skomes and California-via-Adelaide MC & poet Cazeaux O.S.L.O. A written in the stars collaboration begins with a car ride back in 2012. Mellow Dias Thump, a weekly event that O.S.L.O had organised in the scene of Naarm/Melbourne city, was the setting for Skomes to meet his fated collaborator. Over several jams, DJ sets and many poured libations the two discovered the core parallels between them. From their lifestyles, music, food, where they lived to a burning passion for social justice, these commonalities ignited the first inklings of a golden partnership.

Countless shared 20 minute car rides home were the setting for experimentation. Skomes tested out new beats, O.S.L.O spouted self-actualised lyrical interpretations birthed and their first release Static Methods and thus SO. Crates was born. Static Methods plunged them into the live circuit, supporting international and hip hop icons and local legends, allowing SO. Crates to cook up material live on stage before heading to the studio to refine and embellish. 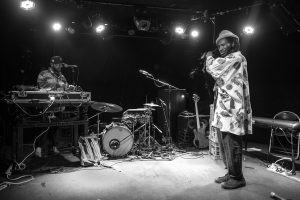 Malcolm After Mecca comes from a new time, the “new Covid world” and their songwriting process had been altered and reversed.

“Luckily, we had the opportunity to get the whole band together in the studio before the big lockdown happened. Here, we planted the seeds of what became the majority of the album. It was a very different process for us —  the difference between a collection of essays to a novel.” (Cazeaux O.S.L.O)

Malcolm After Mecca delivers the bombastically synaesthetic style of SO. Crates, to take us on an exploration of what happens when polar opposites collide.  Balancing fragility with vigour, dark and light, life and death, SO. Crates demonstrate their mastery of exemplifying each necessary shade to perfectly harmonise sound and soul.

Skomes’ ability to forge a sonic “mood ring” via his creatively expressive musical composition inspired the ever growing lyrical prowess of O.S.L.O to delve into stories and emotions rooted within the most important question of all, “why”. The why’s of beauty, terror and the ever mysterious workings of the universe that dictate life in all forms.

“As a human being on earth, I have a story attached to me that lays out what I have done and defines my actions on a deeper level. This album, for me, is looking into the ‘why’ of it all. The ‘why’ is where things get weird and interesting. As a writer, I hope people find this record weird and interesting.” (Cazeaux O.S.L.O)

With a renowned legacy for celebrating collaboration, Malcolm After Mecca is SO. Crates’ biggest celebratory mosaic of creatives yet. Some of the most committed students of the culture join SO. Crates on the album including Tiana Khasi, IZY, Pookie Pataphysics, Jaal, Nui Moon, Rara Zulu and more.

So. Crates lead you into an alternate dimension of cold-blooded beats and soulful lyrical stylings in Malcolm After Mecca, proving yet again that the culture is still popping and hip hop’s golden era is alive and thriving.

Out now on all streaming platforms via Bedroom Suck Records, and available for pre-order via Flightless Distro.