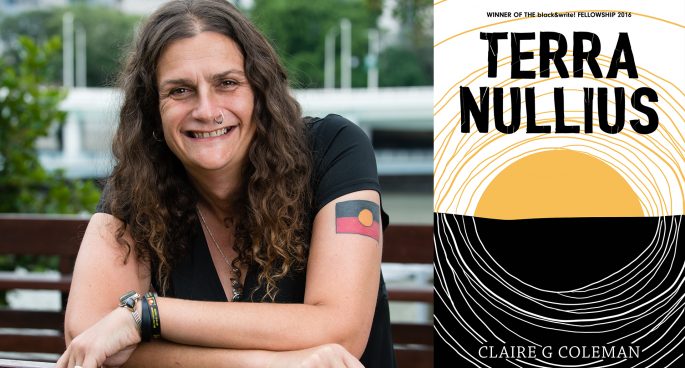 Today’s Great Conversation is with Claire G Coleman. Claire is a Noongar woman from Western Australia. Her debut novel is Terra Nullius. Released in 2017, Terra Nullius has been featuring heavily on award lists; most recently being shortlisted for The 2018 Stella Prize. Written as Claire travelled around Australia, the book explores the impacts of invasion in a thoroughly unique way.

Terra Nullius takes us a to a kind of fictional future-history of Australia. We hit the ground running matching the frantic pace of Jacky, a Native escaped from the convent school where he is treated little better than a slave. Jacky was taken from his parents and has little memory of them other than the name of a town, Jerramungup, where he believes he was born.

The Settlers are soon on Jacky’s trail. Trooper Rohan is famed and feared for his violent temper and is none too happy to be setting off into the harsh Australian interior to bring the fugitive Jacky home.

Amongst the desert landscape two groups orbit; seeking only to avoid the Troopers. Esperance and her Grandfather lead a group of survivors, running from the Settler’s violence and oppression. Eeking out an existence with what supplies they can scrounge, they see little future for themselves or their people. The Fugitive Johnny Star is also on the run. A former Settler Trooper, he has turned on his people and their indiscriminate killing of the Natives and seeks absolution for his crimes.

As Jacky remains on the run he moves closer to these groups and grows in legend, becoming mythological and inspiring other Natives to throw off their chains.

Terra Nullius was written as Claire travelled around Australia. Inspired by the landscape she sought some way to evoke empathy for Aboriginal people in the minds of white Australians. Throughout the novel she explores the ability of people to do evil, despite what they believe to be good intentions. Engaging the reader in a evocative, visceral account of the impacts of oppression and taking us to the front line of colonial violence, Terra Nullius is an important narrative exploration of the impacts of evil deeds.

Terra Nullius is out now from Hachette