How Algae is Changing the Future of Food 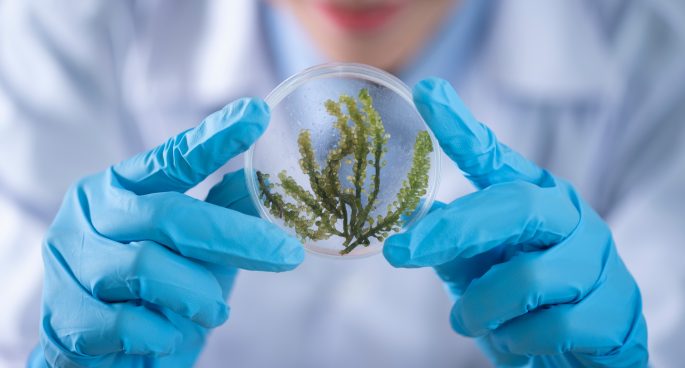 The way we produce our food needs to change. Our current practices will not meet the demands of a growing population and a warming climate. Algae, that slimy green stuff you find at the beach, might just help us more sustainably produce our food.
This episode looks at how Algae biotechnologies are revolutionising the agriculture and aquaculture industry.
Featured:

Algae is often seen as the green, slimy organism, lurking about our waterways, but research has shown this unsuspecting plant may hold the answers to revolutionising farming and food consumption. By 2050 the United Nations estimates we’ll have to produce from 70 per cent up to 100 per cent more food globally to feed our rapidly growing population, all while finding an innovative way to keep emissions down as we meet this demand. For almost a decade the scientific community has pointed towards algae to provide a sustainable solution. And now with the help of new biotechnologies, this tactic is turning into reality.

This advancement in technology can forever change the course of how the agriculture and aquaculture industry operates. In this episode of Think: Sustainability, 2SER, producer and presenter Sophie Ellis is joined by Professor Peter Ralph, Executive Director of Climate Change Cluster at The University of Technology Sydney, Dr Graeme Barnett, CEO and Managing Director of Qponics Limited and Bastien Finet, Operations Manager at Pacific Reef Fisheries. Together, they take a deep dive into just how our algae allies can reduce methane emissions, process wastewater and create planet-friendly food for humans and livestock alike.

Professor Peter Ralph believes that the first step to reducing the environmental impact caused by aquaculture is to find a new source of fish meal; the protein source made from fish, fed to fish and livestock. This is where algae comes into play as it can substitute the essential amino acids and oils previously sourced from fish meal. Plant materials like soy can also be used to replace a bulk of the protein, at a cheaper price.

Although this tactic is still emerging, Australia is working with the CSIRO to develop an algae-based prawn feed that could lower emissions produced by livestock which emit 10 per cent of our country’s overall emissions.

“The current big-ticket item is methane emission from beef.”

“There’s a species of seaweed called Asparagopsis, that has been demonstrated to be highly effective at reducing the methane emission and it’s a small percentage of their daily diet. This is a game-changer for the cattle industry.”

The CSIRO has found that adding just 1 per cent of seaweed into cattle and sheep’s diets can neutralise an enzyme in their stomach, lowering the amount of methane they produce by sometimes 80 per cent. This is a good start, but changing the feeds of the agriculture and aquaculture industry is only part of restructuring the way we process food.

Dr Graeme Barnett and his team at Qponics Limited are currently working on alternative ways to produce essential omega 3 oils without exploiting our oceans or fish. Their solution is to harvest microalgae and extract the oil from it which leaves behind a high protein byproduct. This process is all done within the confines of outdoor raceway ponds.

“We grow [the algae] in outdoor ponds and it grows very rapidly… that speed of growth allows the production facility to harvest algae from a single pond every three days.”

“The whole process recycles the water, time and time and time again. It’s worth mentioning that our microalgae production system is essentially a drought-proof system. We have no need for rainwater or irrigation water.”

These  tactics are proving successful, even in big-industry farming. Bastien Finet has been laying the sustainable groundwork at Pacific Reef Fisheries as operations manager for 10 years. The company operates by the Great Barrier Reef and the Coral Sea alongside 70 per cent of Australia’s farmed prawn productions. Strict agricultural licenses enforce these fisheries to return the water pumped from the oceans back to its initial state, with zero net discharge.

To achieve this, parent company, Pacific biotechnology, is using a process called bioremediation. This extracts the nutrients from the wastewater which is then used to grow algae, filter clean water and recycle it.

“A high rate algae pond and the algae through natural photosynthesis is going to suck up those nutrients and convert them into biomass.”

“We were then questioning ourselves, well, what’s the point in sending it back to the ocean if it’s as clean as when it came through, why not reutilise it?”

The issue of what we feed ourselves also comes into the equation. As our population rapidly grows, our ability to produce food and traditional protein resources will deplete.

Professor Ralph believes microalgae could be a solution.

“We need to massively increase our food production over the next 20 years to feed the population.”

“Micro is a fantastic source of protein. These are called single-cell proteins. You can use yeast, you can use bacteria, you can use microalgae, all three of them will sustain people.”

“Independent analysis indicates that the protein content is up to 72 per cent, approximately 1000 times greater protein productivity than beef farming.”

“What you have to do is not only have a model that produces plenty of alternative protein, you’ve got to have a profitable model. So essentially 98 per cent of our revenue will come from the oil and no more than about 2 per cent less is projected to come from the protein.”

Food companies will need to use these byproducts to create meatless ‘meat’ alternatives and then sell them to supermarkets globally for the industry to progress.

“Getting the right labelling is very important for us, getting the marketing right to make sure that people understand that there are great benefits in having a sustainably grown product.

How Algae is Changing the Future of Food