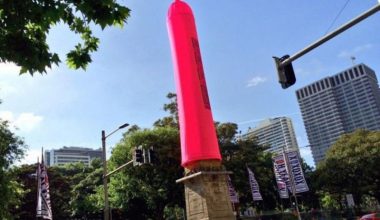 The number one rule of condoms is they should never be re-used. The one exception is when your condom is 18 metres long, pink and is being draped over the heritage listed obelisk in Hyde Park. As you may have seen this past week, the LGBTI health organisation ACON hung their giant pink condom on the obelisk for the second time since its original display for World AIDS Day in 2014. In time for Mardi Gras tomorrow night, the condom serves to promote safe sex and support ACON’s aim to end HIV by 2020. The Daily spoke with Matthew Vaughn, the campaign manager behind the gigantic contraceptive about the promotion, ACON and Mardi Gras.