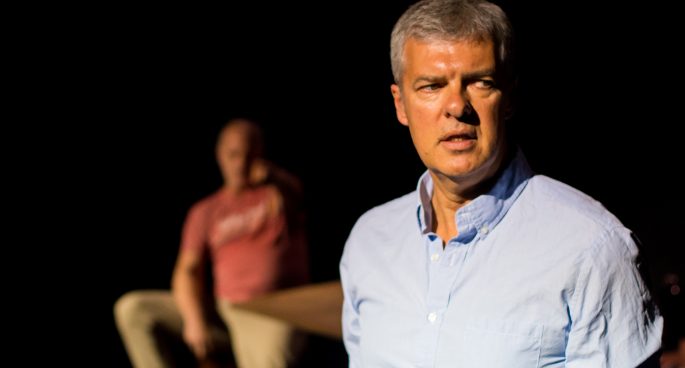 Ian Darling is an award-winning documentary filmmaker, who returns to the stage for the first time in 40 years. His Director credits include The Final Quarter, Paul Kelly — Stories of Me, In the Company of Actors, The Oasis, Suzy & the Simple Man, Alone Across Australia, Woodstock for Capitalists and Polly and Me. He is an Executive Producer of Paper and Glue, On The Record, 2040, The Fourth Estate, The Bleeding Edge, Unrest, Inventing Tomorrow and How to Change the World.

He received the Byron Kennedy Award at the 2018 AACTA Awards, won the AFI/AACTA Award for Best Direction in a Documentary, has twice been a Walkley Awards Finalist and a winner of two Film Critics Circle Awards. His photographs have been finalists in the National Photographic Portrait Prize, the Moran Contemporary Photographic Prize, the Sydney Life Photography Prize, and the Head On Portrait Prize.

Ian is Executive Director of Shark Island Institute, Founder of voxdocs, Good Pitch Australia, Documentary Australia Foundation, and Patron of the ArtsLab, Kangaroo Valley. He has been Chair of The Caledonia Foundation since 2001, was a former Chair of the Sydney Theatre Company and the STC Foundation, a Director of the National Institute of Dramatic Art (NIDA), and was a member of the Salvation Army Advisory Board.