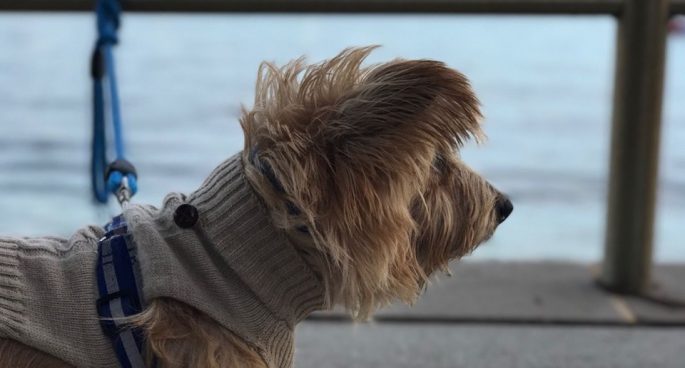 If the guys could see me now! Yew! I’ll always be a Westie though. Western Suburbs that is, I’m a cairn terrier cross. Born and raised in Liverpool. Moved around a bit. Had a couple of families.

“I want a baby, not a dog!”
Turns out Sonny, my previous owner, hoped I’d buy him a few more years before his wife wanted to do the whole family thing.

“He’s cute, just like a baby” Sonny had tried to convince her. Go easy with the baby mate, I’m probably older than you if we do the dog vs human math.

After a few tense weeks I heard Sonny tell his wife he was going to put me up a gumtree. Gumtree? Mate, I’m a dog, not a mangy cat.

I knew change was on the horizon when this couple turned up. An older guy and a younger woman. I thought they might be father daughter? Sonny put me on a lead and let the woman take me out the gate. I walked with her because I didn’t want to be rude but it was kind of weird.
That’s when it happened. We got back to the gate and Sonny gave me that look, I’d seen it before, in other owners. I was on the move again. Sonny’s wife didn’t even wave, I bet she was already tracking her cycle.

In the car ride home, to wherever that was going to be, I could tell straight away it was the woman who wanted me. She was all cuddles and scratches behind the ears while old mate was giving me the dirty eye. I tried sticking my head out the window just to get some fresh air and gather my thoughts about what had happened but she kept pulling me back in.

We drove for a while before we arrived in Double Bay. Never been here before. Seems pretty nice, lots of old buildings. Turns out they live in an apartment. It’s pretty sweet. Lots of soft furnishings, lots of plants, no grass though. That made me nervous initially. Where the heck did they expect me to take a leak? At Sonny’s I was never allowed inside. Now I’m not allowed outside unless someone comes with me!

Turns out they’re not father daughter, they’re husband and wife! That or they are a VERY close family.

Just because I’m now an inside dog living in Double Bay, doesn’t mean I forget where I come from. I’ll always be a Westie. Western suburbs that is. I’m a cairn terrier cross.