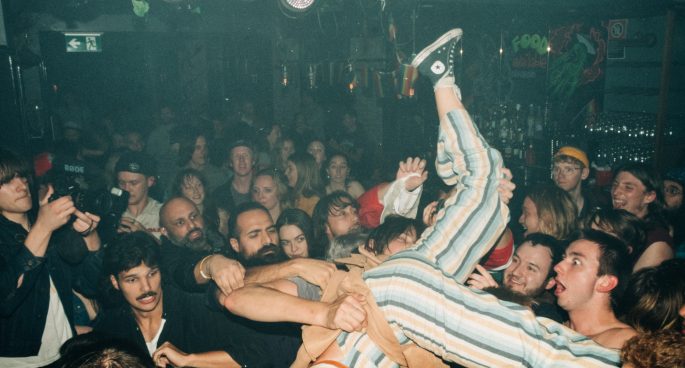 The Monday Daily Gig guide is back for another week with Oscar Byrne and Jarred cross taking you through all of the local live music shows you can head to in the week ahead from :

Eliot wings and the flying serpents W/ Jackrabbit and Hill – The Vanguard  (Tuesday 7.12)

This up and coming Sydney outfit serve up selfish and unapologetic raw rock n roll, with vocal melodies , structures that resemble that first wave of punk in the early 70’s with vocal melodies that verge on that post punk scene. Their sound also features a sprinkle of jangly guitars that drawing influence from early 2o00’s British bands like the Libertines. Joining them on the night will be five-pieced inner west grungy, alternative rock inner west outfit Jackrabbit.

Next up is another local show, this time at Goodspace gallery just above the Lord Gladstone! Taking the stage will be Finn Allen, a Sydney-based artist who’s sound is somewhere between the American Lo-Fi Indie of Pavement and Elliott Smith and the sunny Australian guitar pop of The Hummingbirds and The Go-Betweens. His live band, Finn Allen & The Fishbowls, are a team made up of four other musicians that are also members of various local bands in Sydney’s music scene. Their shows are loud yet honest, with Finn Allen’s storytelling lyrics taking priority over the wailing of power-pop guitars.

From 9pm, join Orion Jennings as he returns from his guided tour of a wholesome life.  Jennings is ready to leave his day job as a walnut for the night to shake things up and bring you a new take of his various sounds he has been mulling over.

STAIN is a 4 piece punk band from Sydney, Australia. Experimenting with bent out of shape melodies, high energy rhythmic patterns and screeching vocal tones to create their own sound. They’ll be playing with droves, DROVES’s futuristic look at New Wave Punk has drawn comparisons to early New Order, The Eurythmics and The Cure.

Get down, it’s free, it’s going to be loud and sweaty as it always is at the lansdowne so get your dancing shoes on!

This Saturday Organs are excited to play their last show of 2021 with support from the wonderful Marilyn Maria and Imaginary People. In the middle of self-recording our debut album, they thought they’d end a most frustrating year on a rare note of positivity.