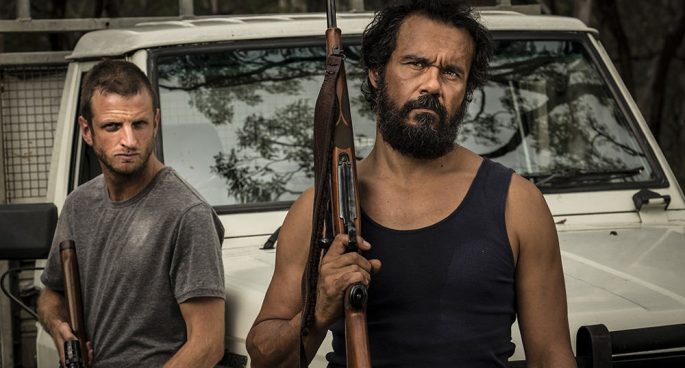 Silence is golden for a good horror film.

Killing Ground isn’t the first shocker to be filmed in the isolation of the Australian bush, and based on the success of the formula, deployed to no small effect here, it won’t be the last.

With a premise that won’t be unfamiliar to seasoned horror fans, the tropes here run thick and thin. A new year’s getaway with a young, enamoured couple (Harriet Dyer, Ian Meadows), an abandoned campsite, a couple of very bad guys (Aaron Glenane and Aaron Pedersen in two frighteningly good, well-contrasted performances) and at least one example of something you should never do if you’re in a horror flick all make their way into the movie.

The novelty here is the film’s discordant style – depicting two separate series of events, one past and one present, each building up the anticipation in the other better than flashbacks or an offhand hint waylaid into the drama ever could. Generally well-cast, Pedersen playing against type is all the more engrossing for his relative complacency in light of the events unfolding before him, while Glenane as his less than predictable partner comes away with some of Killing Ground’s most memorable scenes; among them a despicable game of William Tell featuring his character’s recurring, frightening bark.

Dyer is really the stand-out of the cast; the couple, second-fiddle to most of the action, still pack enough charisma to maintain pride of place throughout the film. A sub-plot carefully interspersed from the outset involving the couple adds an extra layer of tension and some of the film’s most dramatic moments later on – unexpected and intriguing in equal measure in a picture you didn’t know would hit all kinds of raw and stagger with shockers deep out of left field.

Director Damien Power makes the most of the sparse locations – accentuating scene upon scene with an unnerving, occasionally shrill silence, only to masterfully jar the lulls in action with any number of vivid moments. These instances, supremely suspenseful in and of themselves, often give way to particularly harrowing violence from which Killing Grounddoes precious little to shy away. Packing enough drama to keep everything going without its most dreadful moments, these few episodes are often more disquieting then they are shocking or horror-inducing and of such a nature that a film of this adept pedigree could have done just as well without.

Compelling for, more than many other familiar predicaments, the brutal recognition that this could happen to just about anyone, Killing Ground is recognisable horror with more than enough reimagined and ably tacked on to make for a clever, captivating Aussie thriller.

Killing Ground screened as part of the Melbourne International Film Festival 2016 and will screen in cinemas nationally from August 24, 2017

Will The Climb  leave you on a high? Does Never…