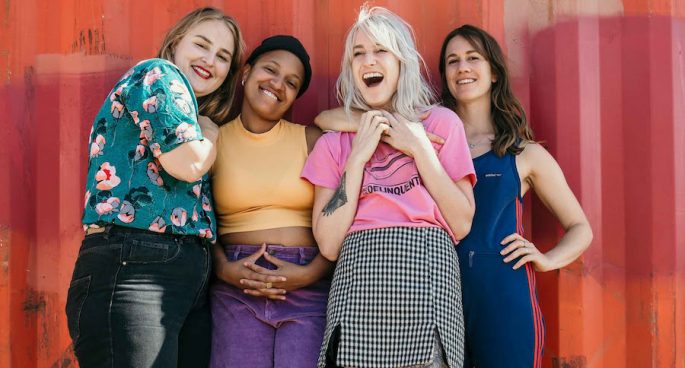 L-FRESH The LION – SOUTH WEST (FEATURE ALBUM)
—
The Beths – Jump Rose Gazers
The Buoys – All This Talking Gets Us Nowehere (EP)
Floodlights – From a View
Keleketla! – Keleketla!
My Morning Jacket – The Waterfall II
Soko – Feel Feelings

Following their self-released debut EP Soft Boy, Sydney indie-rock quartet The Buoys have signed to Spunk Records and released their follow-up All This Talking Gets Us Nowhere. Led by singer-songwriter Zoe Catterall, the group make brash and melodic form of pop-rock, infusing a lo-fi garage rock spirit with undeniably catchy pop melodies – imagine Paramore’s Hayley Williams backed by The Sonics and you’re getting close to what makes The Buoys so much fun. Lyrically, Catterall takes the small embarrassments of Sydney life and turns them into pop gems: shit bosses, HECS debt, and online job searches all ripe for skewered and turned into sing-along choruses. Brandishing a confident voice and pop sensibility, All This Talking shows The Buoys are a rising band to keep an eye on.

Talk of British electronic music or DJ culture in general, and the conversation will inevitably turn to the duo Coldcut and masterminds behind Ninja Tune at some point. The “first stars of UK dance music”, their mash-ups of electronic, funk, hip-hop, and spoken words have been essential ever since their influential 1987 remix of Eric B. & Rakim’s “Paid in Full”. Innovators at heart, their latest project Keleketla! finds them travelling between Soweto, South Africa and their home in London to produce a collaborative and sprawling Afrobeat record. Recording with musicians across the African diaspora, contributors include anti-capitalist hip-hop collective Soundz of the South, gqom producer DJ Mabheko, and the late Fela Kuti drummer Tony Allen. Often faithful to the Afrobeat sound, the record really comes alive on tracks like “Shepherd Song” when Coldcut start infusing their own electronic sound into the music and tap into the experimental music scene in South Africa, creating tracks which are innovative, energetic, and feel like something completely new.