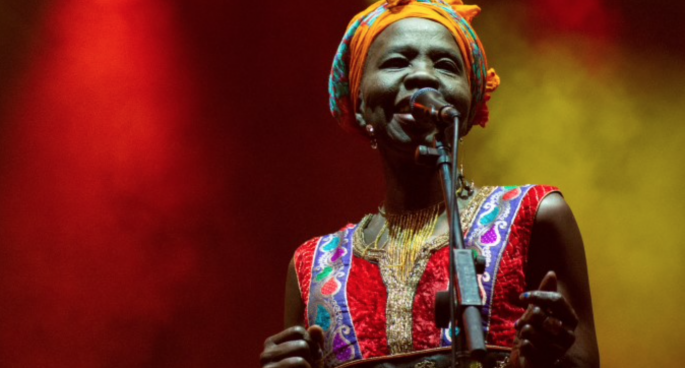 Let Me Grow My Wings, the fifth album by Sudan-born, Melbourne-based singer Ajak Kwai, is the best of her career so far. Singing in English, Arabic, and Dinka, Kwai mixes her South Sudanese rock sound with brief moments of other genres – trip-hop, lounge music – that bring this music into really interesting spaces. But for its peaceful mood and ecstatic joy that runs through Wings, it’s also fiercely political album that calls for peace and reconciliation in the face of her experiences of racism and war as a Sudanese refugee.

If you happened to see the Dead Kennedys or John Cooper Clarke tour Australia in the 1980s, you may have seen a group of 10 to 14 year-old musical prodigies  open for them. Tangled Shoelaces, the cult Brisbane indie-rock group, were once a novelty act for for just how young they were; but a new compilation from Chapter Music, Turn Your Dial, also shows them to be a remarkable band in their own right. From their melding of complex jangle-pop guitar riffs with new wave synths and drum machines, to their shots at Malcolm Fraser’s views on Aboriginal land rights, the songwriting is more fun and adventurous than many of their adult contemporaries. An essential compilation of a forgotten Australian band.

Ever since reforming with the original trio back in 2007, Dinosaur Jr., the influential alt-rock trio from Amherst, Massachusetts, have been making albums which stack up well against their classic ‘80s and ’90s output. At this point in their career, the trio have a chemistry – with J Mascis’ huge, chugging guitars, Murph’s rolling drums, and Lou Barlow’s melodic basslines – that rivals any rock band in American music. To a certain extent, this allows to go on autopilot: despite getting guitarist Kurt Vile to co-produce and play guitar on the album, Sweep sounds like just about every other Dinosaur Jr. album. But for fans of the group, this is just about the highest you could give.